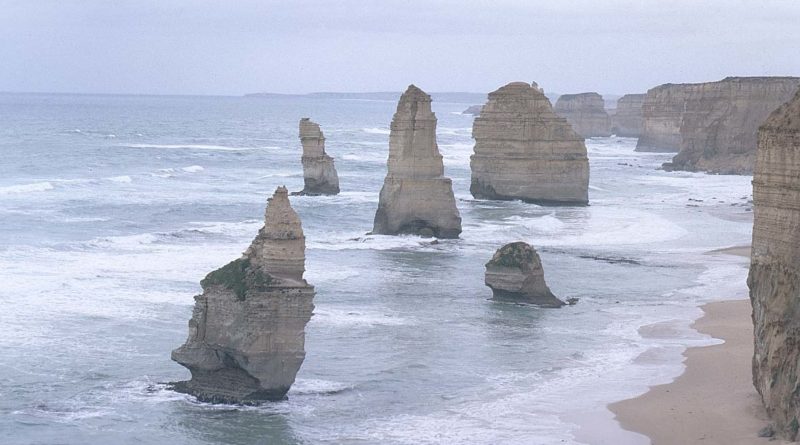 The first thing to remember about Australia when you are planning a trip there is its size. It is BIG. Only Russia, Canada, China, the USA and Brazil are larger. This single nation has three separate time zones: Sydney in the south east is two hours ahead of Perth in the west. So it is not possible to just go and “see Australia”. Flying from one side to the other is 2,000 miles and takes over three and a half hours; flying from Melbourne in the far south to Darwin in the tropical north will also take about three and a half hours. I asked my cousin, who lives in Australia, what was the best time of year to see the country – and only revealed my ignorance, because I should have known that Australia is so vast there is no one month that is the best in which to see all of it.

Sydney inevitably attracts most tourists (2-3 million from abroad each year) and has something for every taste, whether it be culture, sightseeing, shopping or nightlife. The 1973 magical urban sculpture that is Sydney Opera house is the most iconic of the 18 World Heritage Sites in Australia. Its much-photographed three groups of vaulted interlocking ‘shells’ are set on a platform at the end of a peninsula projecting into the Harbour. There is a two hour backstage tour, on which your expert guide will tell you stories of the real life dramas behind the polished performances. The tour takes you onto the stage and into the stars’ dressing rooms, culminating in a breakfast in the Green Room. (Book well in advance as this tour typically sells out.)

Other popular landmarks in Sydney include Sydney Harbour Bridge, the fifth longest spanning-arch bridge in the world, linking the Central Business District to North Shore; Sydney Tower, the city’s tallest structure with two restaurants; and the Queen Victoria Building, a 19th century Romanesque Revival building designed as a shopping centre and used for that purpose now.

For great shopping, try the Rocks district or George Street and Pitt Street, Castlereagh and King Street in the city centre, where you will find both designer and high street fashion. Sydney’s outdoor markets offer everything from fresh food to beautiful gifts, vintage furniture and entertainment.

Sydney nightlife offers some of the best cafes, bars, pubs and restaurants in Australia, and the wildest nightlife tends to be in the King’s Cross area. Live music, dance and theatre abounds. There are more than 40 gay bars in this, the gay capital of Australia, and the Mardi Gras Fair Day in February in the park is a colourful display of gay culture.

But Australia is probably better known for its sport and adventure opportunities, and Gap Year backpackers flock to bungy jumping, white water rafting, skydiving, ballooning and, yes, even being rolled down a mountainside strapped inside a transparent plastic ball. Top attraction of this kind in Sydney is climbing Sydney Harbour Bridge. There is a choice of three guided group climbs to the top of the bridge for thrilling views of the city. (It is essential to book in advance.) An alternative for those who like to feel exposure is the Sydney Tower Skywalk, an open air platform twice the height of the bridge.

If beach and surfing culture is your thing, Australia can offer some of the best in the world. Bondi Beach near Sydney is still one of the most popular with surfers and sun worshippers alike; stunning Cable Beach on the Indian Ocean at Broome in Western Australia, or glamorous Four Mile Beach north of Cairns, with its backdrop of rainforest mountains, are equally exciting in different ways. The last named beach at Port Douglas on the Gold Coast also marks the start of the Great Barrier Reef, a 2,000 km natural wonder so big it can be seen from space.

Australia is now internationally known for its wine, with the best regions being in the southern, cooler parts of the country. Day trips can be taken from Sydney to the Hunter Valley, which has over 100 wineries, or from Melbourne to the renowned Yarra Valley, surrounded by mountains.

Because of its isolation in pre-history, Australia has a number of unique and fascinating animals. Best known are the marsupials like the kangaroo and wallaby, or the cuddly koala and burrowing wombat. Egg-laying mammals (‘monotremes’) are found only in Australia; examples are the river-dwelling platypus or the spiny, ant-eating, echidna. The eerie laughing Kookaburra and the colourful budgerigar are birds native to Australia, but my favourite creature of all would have to be the incredible lyre bird. This ground-dwelling pheasant-like bird has an unbelievable ability to mimic any sound it hears, from chainsaws to car alarms to camera shutter motors. They also mimic other birds and animals with uncanny accuracy. (If you can’t get to Australia to see it, there are plenty of incredible videos of the lyre bird’s amazing virtuosity on the internet.)

A central place in Aboriginal culture is held by Uluru, also known as Ayers Rock in the Northern Territory. The nearest town to this large sandstone rock formation is Alice Springs, but the fact that 335 km separate the two is a reminder of the size and emptiness of the ‘red centre’. Many tourists fly to Uluru from Alice Springs, but a six hour bus journey with an entertaining driver will let you experience more of the ‘outback’.

Finally, while in Alice you can discover some of the historic features of the way Australians coped with vast distances and isolation, by visiting the Royal Flying Doctor Service, the School of the Air, and the Telegraph Station Historical Reserve, one of the original sites of European settlement in the town.