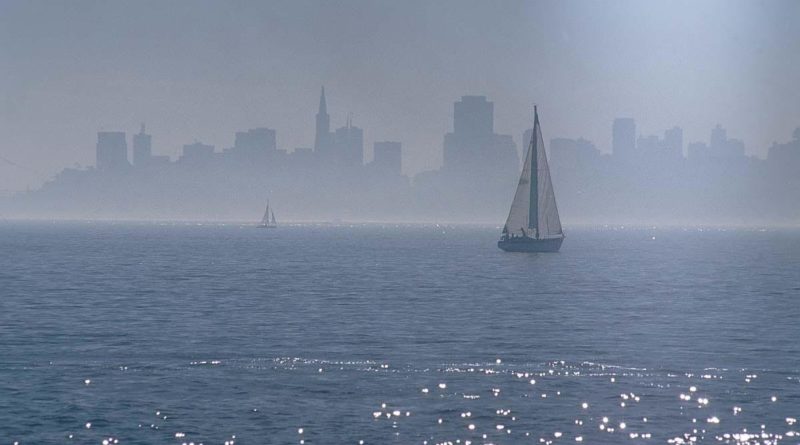 On this page you will find pictures of San Francisco’s tourist attractions, California, USA.

The colonizing of the San Francisco area (named after St Francis of Assisi) began in 1776 when a fort at the “Golden Gate” was built by Spanish colonists. The city boomed following the discovery of gold in 1848, and quickly became the largest city on the west coast. The arrival of the railroad from the Atlantic to the Pacific in 1869 made San Francisco a very important port for US trade.

San Francisco is situated close to the San Andreas Fault, making it vulnerable to earthquakes. The earthquake of 1906 destroyed three-quarters of the city and killed several thousand people. The city was quickly rebuilt and is now reckoned to be one of the most attractive U.S. cities, although it still experiences regular minor earthquakes. In spite of its uncertain seismic situation, it has grown from a population of 400,000 at the time of the 1906 earthquake to 6.5 million in the present day San Francisco Bay Area. Chief among San Francisco’s tourist sites is the world famous Golden Gate Bridge, one of the world’s most beautiful and most photographed bridges. Completed in May 1937, its total length is 1.7 miles (2.7 km) with a clearance above water of 220 ft (67 m). The Golden Gate Bridge is part of the U.S. Highway 101, and tolls are collected in the southbound direction.

Built on more than 50 hills, the city is also famous for its cable car system. The first line started public service in 1873, and the system survived an attempt to close it down in 1947, when the Citizen’s Committee to save the cable cars began a petition. San Francisco’s cable cars are now retained mainly as a tourist attraction, and you can learn more by visiting the Cable Car Museum at 1201 Mason Street.

For shopping and dining in the historic part of San Francisco, head for Ghirardelli Square where you will find a chocolate factory offering tours; or for food outlets and farmers’ markets in an historic architectural landmark, try the Ferry Building Marketplace.

Alcatraz, a Federal Prison from 1934 – 1963 on an island in the middle of San Francisco Bay is one of the top attractions in the area. Book online for the tours which go 7 days a week. Alternatively on Thursday to Monday evenings you can join the spooky Alcatraz Night Tour, a self guided walking tour of the prison using headphones.

Finally, don’t miss the Maritime National Historic Park, which is located at the west end of the world famous Fisherman’s Wharf, itself a fascinating area of piers and boardwalks. Here you will see a fleet of historic vessels, and can visit the Maritime Museum and Library.

Choice is what San Francisco is all about, and the first one to be made is whether you want to stay up on the hill overlooking the city and the Bay, or down on the shore by the Marina and Fisherman’s Wharf.

A 5 star hotel on Nob Hill, the luxurious Fairmont, may seem to offer the best of both locations: the spectacular Golden Gate Bridge is in view, but is only a 6 km drive away; it is only a 5 minute cab ride to the Ferry Building, and there is a cable-car stop just a 10 minute walk away. Among its 591 rooms in the Main and Tower Buildings there is a wide choice, ranging from King Suites with Bay View, to Standard Rooms. In fact I counted 12 separate types of room to choose from, some having their own balconies.

If you prefer to be on the Wharf, you could try the well-recommended Argonaut, part of the Kimpton group of hotels. It has 252 rooms all with a nautical theme, and its own traditional seafood restaurant, the Blue Mermaid, although much more choice is available nearby on Fisherman’s Wharf. This is a luxury but eco-friendly hotel, with a fitness centre and in-room yoga TV channel, a Business Centre and free WiFi. This hotel has its own free parking.

In a central location between the Golden Gate Bridge and the wharf is the budget Coventry Inn, in the picturesque Marina District. There may be less choice among its 239 rooms, but the beds are comfortable and a number of tourist attractions and good restaurants are close by. Here the WiFi is free, which it certainly isn’t at the Fairmont.

Those who are backpacking may prefer a Youth Hostel, not just because it is cheaper, but because they are more likely to meet like-minded people. One of the most popular is the USA Hostels’ San Francisco, in a central location just a few blocks from a cable car route. This hostel offers free pancakes and fruit for breakfast. There is a Common Room and guest laundry, as well as a mini-supermarket – in fact everything you are likely to need is there.

A close rival is Hi-San Francisco’s Downtown Hostel on Mason Street. Breakfast and WiFi are free, and there is a kitchen for guests to use, though there are plenty of restaurants and bars close by, including in Chinatown.

But if you want to be on the waterfront, Hi-San Francisco also has the Fisherman’s Wharf Hostel, in historic Fort Mason, between a park and the Bay. A bus stops outside, and the hostel puts on excursions like pub crawls and guided walks. They have rooms for up to three people, as well as shared dormitories.