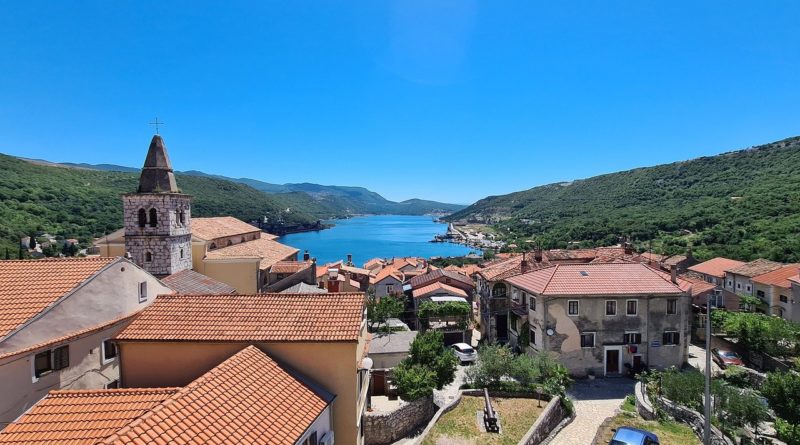 Bakar is a town and port in Croatia. It is located in the Bakar Bay, a part of the Primorje-Gorski Kotar County. It lies on the northern coast of the Adriatic Sea and covers an area of nine settlements. Bakar is located on a hill in the northwestern part of the bay of the same name and is surrounded by hills that reach up to 300m above sea level. The whole area is rich in springs of drinking water. The bay is covered with deciduous trees and low vegetation. Most of it, however, is occupied by bare rubble. The historical core of the city (declared a cultural monument in 1968) is divided into two parts: the older, the upper, the so-called “City” in which there is a settlement surrounded by city walls and the lower part consisting of the areas “Zagrad” and “Primorje” which developed in time. The climate is Mediterranean, so the architecture corresponds to the Mediterranean type of construction with many winding, narrow, steep and stepped streets and small squares. In the northwest, about 15 km further, lies the city of Rijeka.

The legend of the origin

There are legends that the settlement from which today’s city of Bakar originated was created by the settlement of Jews from Jerusalem who in the 1st century escaped the destruction of Jerusalem by the Roman emperor Titus. Also, there are legends that speak of the existence of settlements founded by the Illyrians long before our era by assimilating the original inhabitants of the Celts. It is most probable that in the area of ​​today’s city there was a significant Roman settlement named Volcera.

In the 13th century the names Bukar and Bkri and the Italian name Buccari are mentioned. The name of the town is first encountered in the Vinodol Code (1288), and there are assumptions that it originated from the proximity of a nearby copper ore mine.  In 1778, Bakar was declared a free city by the charter of Empress Maria Theresa and received the status of a free trading port, which led to the development of maritime traffic, trade and increased construction. The following year he received the status of a royal city and the Empress granted him the coat of arms, autonomy and church patronage. In 1779, the first four-year primary school was founded. From important historical events it is neccesary to outline the foundation of the naval school in 1849 and the Croatian Shipping Company in 1875. In 1882, Bakar was annexed to Croatia. Unfortunately, in 1883, with the construction of the Karlovac – Rijeka railway, Bakar began to lose its importance due to the diversion of port traffic to Rijeka. In the 20th century its industrialization begins with the construction of a coke oven, which instead of development brings ecological devastation to the entire bay (closed in 1995).

Near history of Bakar

In the near past, Bakar was the center of tuna fishing in the northern Adriatic, and its fishermen supplied Rijeka, Trieste and Venice. There was also a large fleet of 60 merchant sailing ships. World-famous sparkling wine called “Bakarska vodica” was produced in Bakar. Today, the printing business is widespread with several newspapers and published books, catering facilities are spread throughout the area, and an industrial zone has been built in the hinterland. The construction of Bakar’s dry stone walls was encouraged by Empress Maria Theresa in the second half of the 18th century. Dry stone walls allowed the wastelands ito be turned into vineyards. The Belina vine was grown here, from which the famous sparkling wine “Bakarska vodica” was obtained. The presidiums were built until the 20th century, and were abandoned in 1956. Shortly afterwards they were declared an ethno zone (protected landscape) and entered in the register of cultural monuments (1972). In 2001, the cultural and social association Dolčina from Praputnjak started their rebuilding and production of traditional sparkling wine, the production of which is regulated by the 1929 Wine Act.

In the middle of the seventies of the twentieth century, the intensified industrialization of the entire country began, and economic facilities were located in the bay of the city: coke ovens, ports and oil plants, which contributed to the ecological devastation of the entire area. The coke plant was opened in 1976 and until 1995 it existed as part of Bakar history. The plant was used for the production of coke, and in addition to the complex, in 1977 a 250 m high chimney was built, which was used to emit harmful exhaust gases. Coke production stoped at 1995 and today’s industrialization implies far less aggressive facilities.

Kukuljanovo Free Zone is located in the hinterland of the city, 17 km from Rijeka. It is located on an extremely favorable strategic traffic route, close to the Rijeka-Zagreb highway, the Rijeka-Split highway and the traffic route of the planned Rijeka-Trieste highway. The Bakar port complex is only 3 km away, and the Škrljevo railway station is nearby. The activities performed there are the production of goods and their finishing and processing, wholesale and trade intermediation, banking services and other monetary transactions, insurance and reinsurance of property and persons.