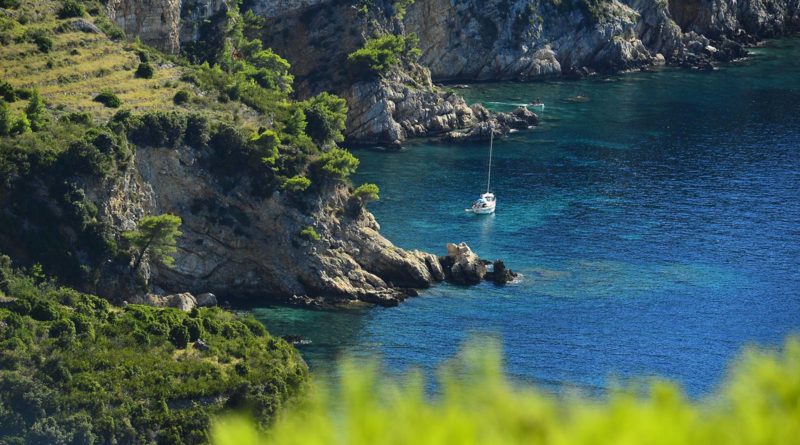 Komiža is located on the west side of the island of Vis, Croatia, in the deep Komiža Bay. It is separated from the rest of the island by the Hum massif (highest peak 587 m) which descends steeply to the shores of the bay. Such geographical position, and the lack of agricultural land, determined the orientation of Komiža towards the sea and fishing. It is connected to the town of Vis, 10 km away, by a new road via the Sveti Mihovil pass. The distance along the old road Vis – Komiža that passes through the southern part of the island is 20 km.

Komiža is a settlement of younger origin than the neighboring town of Vis. One of the theories about the origin of its name says that it originated from the word Com Issa, which literally means a place next to Issa, an ancient settlement on the site of today’s Vis. It is assumed that the Greeks and Romans also inhabited the bay of Komiža, but so far no material evidence has been found. Komiža was first mentioned in 1145 as Val Comeza in the grant of the Zadar prince Petar, who ruled the central Dalmatian islands.

During Austro-Hungary, the municipality of Komiža had over 5,000 inhabitants. More then three times more than today. There are numerous causes of such demographic decline; first grapevine disease and the First World War, which forced many Komiža residents to emigrate to America, and even more the Second World War and its consequences. The post-war military isolation of the island of Vis, and the associated economic backwardness, led to a large outflow of young people leaving in search of work. After the departure of the army from the island (1992), stronger development of tourism began, and thus until the cessation of emigration. Unfortunately, this process stopped naturally, because the elderly population remained in the place anyway. After the independence of Croatia and the departure of the army from the island, emigration stopped and tourist development began. In 1993, the municipality of Komiža was rebuilt, which in 1997 received the status of the City.

Komiža is known for its fishing tradition, which was transferred to North America by the emigrated people of Komiža. Before World War II, there were seven fish processing factories in the place, which were later merged into the Neptune factory. Until recently, it was the largest and most important economic entity in Komiža, but it completely disappeared in the transformation.

Muster, a parish church dedicated to St. Nicholas, encompasses a set of buildings perched on a hill above the site. It is mentioned in documents at the end of the 12th century as a Benedictine monastery. The church and monastery were built in the 13th century on a dominant site inhabited since prehistoric times. The church was rebuilt and extended in the 16th and 17th centuries, as was the Romanesque bell tower. With its distinctive monumentality, this complex dominates the bay of Komiža.

Gusarica, the Church of St. Mary, was built on the shore at the western end of Komiža from the 16th to the 18th century, when it is called Cursariza in archives and writings because of a tradition from the beginning of the 18th century which says that pirates stole a painting on wood , but the sea threw her out again in front of the church. The church has a long wooden choir, the middle part of which is baroque, and both wings are built with carved bars. The choir has an organ made by a monk from Krakow, Stjepan Kilačević, in 1670, and remodeled and expanded after two centuries by Josip Girardi from Bassan. Therefore, this organ with eleven registers is the oldest preserved in Dalmatia.

The commune, the castle, was built at the end of the 16th century on a small cape of the peninsula in the port of Komiža, which today ends in a breakwater. Its square shape spreads at the bottom by sloping walls. The north and west walls were in the sea before the construction of the shore, so they have bulky stone rings for mooring anchored sailing ships. The solid walls end in a rounded bulky crown, on which some openings were enclosed by walls on still-preserved double consoles. In the walls are cannon throats, narrow loopholes, and square openings above the wall cornice. Today, the castle houses the Fishermen’s Museum.