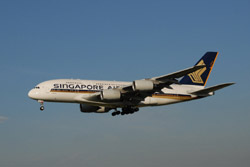 In 1899 the Wright brothers constructed and launched a series of gliders to test the manoeuvrability of a manned aircraft. Then on December 17, 1903, powered flight was first achieved when over the course of the day both Orville and Wilbur piloted successful flights, the longest lasting 59 seconds and covering over 850 feet. Around the same time the Frenchman, Louis Bleriot, was experimenting with powered flight and in 1909 he won a £1,000 prize offered by a newspaper for the first powered aircraft to make a crossing from France to England. The first trans-Atlantic flight followed in 1927 when Charles Lindbergh made the crossing from New York to Paris in the legendary ‘Spirit of St. Louis.

The First World War gave aviation technology a boost: at the start France, for example, had only 140 aircraft, and only four years later she had 4,500. In 1914 airplanes were regarded as useful only for reconnaissance; by the end of the war Britain had the Handley-Page bomber capable of carrying a 900 kg bomb load and Germany had the Fokker D VII, widely considered the best fighter of the era. The first operational jet fighter was the Messerschmitt Me 262 Schwalbe, but Germany did not have it ready for use until 1944. One significant development of the Second World War was the use of aircraft carriers, especially in the war in the Pacific Ocean: at the start of the war Japan had 10 carriers and America had 7. The Japanese attack on Pearl Harbor, which brought America into the war, was carried out by fighters, bombers and torpedo planes launched from six aircraft carriers.

Experiments with supersonic flight were made during World War 2, but the first plane recorded as flying faster than the speed of sound was the American Bell X-1 rocket plane in 1947. Most modern fighter aircraft are supersonic, but there are no supersonic passenger airplanes in service since the retirement of the Anglo-French Concorde in 2003. Today, as technology has evolved, the war airplanes are absolutely stunning and geek.hr website has made a list of the ten deadliest fighter jets in the world.

The first scheduled service between the USA and Europe opened in 1939 with the Boeing 314 Flying Boat, and the first jet passenger service across the Atlantic followed in 1958 when Pan American used the Boeing 707 on the New York to Paris run. The “jumbo jet” era started in 1970 with the Boeing 747, two and a half times the size of the 707, with its recognisable two-deck hump shape. Later versions of the Boeing 747 jumbo can carry 524 passengers. The first passenger airliner to be built of composite materials with a view to reducing weight and fuel consumption is the Boeing 787 Dreamliner. This wide-bodied, twin-engined jet carries 290 passengers with a range of over 15,000 km.

Air travel is now a huge industry, employing thousands of people as flight crew, ground crew, air traffic controllers and passenger and freight handlers. As well as passenger airlines and military aircraft, there are countless private planes, and commercial and military helicopters. One of the more recent developments in aviation warfare is the use of unmanned “drones” to destroy enemy installations and kill targeted people using rockets, without risking pilots. One of the earliest forms of manned flight, the lighter-than-air balloon is still popular for leisure flights and world record attempts, and un-powered fixed wing gliding and paragliding are hobbies enjoyed by people all over the world. Low-powered, low cost “micro-lights” have brought flying within the budget of many ordinary people. Certainly aviation has come a very long way from Ancient Greek attempts to imitate birds or early Chinese manned-kite flights from the top of towers! And we haven’t even mentioned space flight…