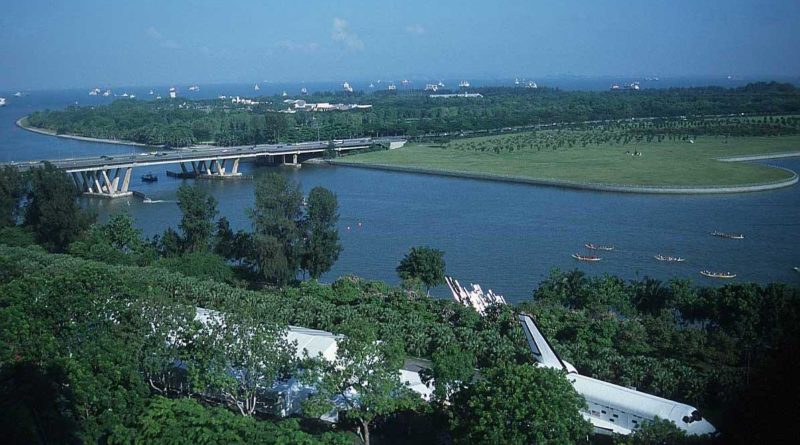 The Republic of Singapore is a city-state in Southeast Asia, situated on the southern tip of the Malay Peninsula, south of the Malaysian state of Johor and north of the Indonesian Riau Islands. The name Singapore was derived from the Malay word singa (lion). Singapore was originally a small Malay settlement until 1819, when the British started a trading post that developed into an important commercial and military imperial base.

Except for the interruption for the three years that the Japanese occupied Singapore during World War II, it was a British Crown Colony from 1867 until 1963, when it declared independence from Britain. Singapore joined the Federation of Malaysia shortly afterwards. On expulsion from Malaysia in 1965, Singapore was separated from its traditional markets and faced economic degeneration. In resolution, government-led rapid industrialisation and business-friendly policies stimulated some of the fastest economic growth in the modern world. Singapore now has one of the highest gross domestic products (GDP) per capita rates in the world; it is a major financial, transport and medical hub. Crime is low, and Transparency International consistently rates it as one of the least corrupt countries in the world.

What to see in Singapore: Orchids will be there to greet you at Singapore Airport, and if that whets your appetite then, as soon as you can, head for the National Orchid Garden in the Botanical Gardens on Cluny Road. Including hybrids, there are hundreds of different orchids on show in the garden. If you go early you can have breakfast in one of the park restaurants.

If you go early to our second attraction, you may find yourself going round the Asian Civilisations Museum in Empress Square in the city centre on your own. Presenting the history and culture of the trade between China and the Indian Ocean countries with interactive screens and displays, the museum is air-conditioned and well stocked with artefacts and pieces from other Asian states, including textiles and musical instruments. In common with many of the world’s capital cities, Singapore has a giant wheel, the “Singapore Flyer”, which claims to be the tallest of the lot at 165 metres (541 feet). From the top you can see all over the city of Singapore and into Malaysia. A great place to go with the family or just with friends is “Lockdown SG”, a reality gaming area which simulates an online computer game! You can stay in the ‘top secret’ room for one hour playing detective and trying to solve puzzles. The aim is to use your skill and intelligence as a team to find the keys and escape from the room – don’t worry, if you fail they let you out after an hour anyway!

In contrast to most cities in Asia, you won’t see any food stalls on the street in Singapore. When the government swept them away the gap was filled by an excellent Singaporean institution: food courts, known as “hawker food centres”. These food outlets are owned by the government, and are frequently in air conditioned shopping malls or other commercial buildings, but many of them are open-air – in fact you are never far from one in the city. They sell cheap, reliable food and are ideal for the tourist on a budget or visitor wanting to experience local cuisine safely. Two of the best are Maxwell Road Hawker Center on the edge of Chinatown, and Old Airport Road Hawker Center, where you can get excellent sea food at half the price of city centre restaurants.

If you can afford it, there’s still only one place to stay in this modern city, the 5 star, colonial style Raffles Singapore on Beach Road. A byword for elegance and service for the last 125 years, Raffles only has suites, 84 of them in the glorious Courtyard and legendary Palm Court. If the room rate is too high for you, there’s always Afternoon Tea, but, be warned, if you are not properly dressed the Sikh doorman will politely refuse you entry. If that happens, go round to the Long Bar for the obligatory “Singapore Sling”.

At the other end of the scale, the Little Red Dot hostel at 125 Lavender Street is popular with backpackers. Accommodation is in a choice of “capsule” bed for more privacy and quiet, or in a 6 person dormitory, and bathroom facilities are shared. This hostel is handy for the MRT station. For something in between try the Ibis Singapore on Bencoolen – a modern 3 star hotel with clean, well equipped rooms with fridge and tea and coffee facilities. There is a bar and Singaporean restaurant, and the hotel is well situated only a 20 minute drive from the airport and convenient for the city centre.