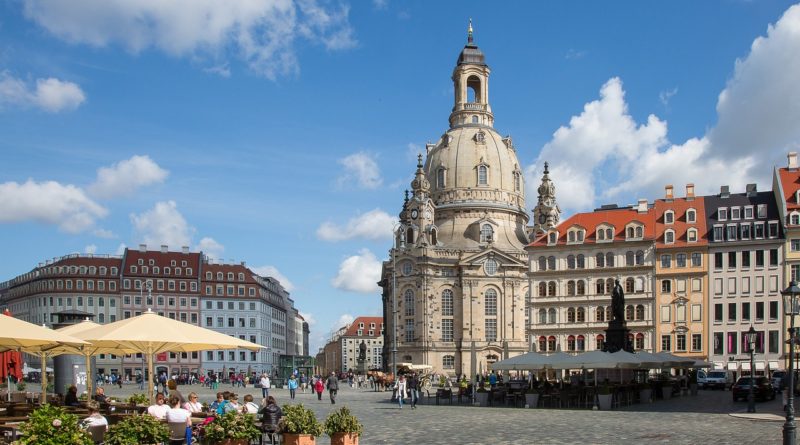 You visited this historically important and beautiful German town, but you don’t know which pictures of Dresden you should show to your friends, now that you are back home. They don’t have a strong attention span and you are very enthusiastic about making them go and visit Dresden themselves.

Here are five suggestions that should make people of different interests at least consider putting Dresden on their travel map.

Dresden is the Capital city of the German federal state of Saxony, settled on the river Elbe. There, on the river, connecting two sides of the city lies the first symbol of the city, the „Blue Wonder“ bridge. It’s official name is „Loschwitz Bridge“, but it is far better known for his unofficial one. The construction was finished in 1893 and it is the fifth bridge constructed over the river Elbe. It got it’s reputation from it’s cobalt blue color and it’s construction, very innovative for the time in which it was built.

Frauenkirche, or Our Lady’s Curch

One of your pictures from Dresden should definitely be the one with Frauenkirche on it. First small church built on this area was a missionary church built in 11th century, followed by a much bigger Gothic style building from a 13th century, which was replaced by a late Gothic church in 15 century and finally by a 18th-century Baroque style church, a masterpiece conceived in the mind of architect George Bahr, whose stone dome dominated the landscape of the city for two hundred years.

The Frauenkirche dome collapsed on the 15th of February 1945, two days after the massive bombing of Dresden. Direct hit and flames that were set off by the bombing destroyed the wooden parts of the Church and made the sandstone explode until there was not enough to support the massive twelve thousand tone dome.

Frauenkirche was left in ruins for decades until during the 1990s a massive movement throughout Germany and even around the world gathered around an idea that Frauenkirche should be rebuilt with as many original stones as possible and that it should be a place of peaceful remembrance on the atrocities of the Second World war. The church was completed in 2005. It is now again one of the cities landmarks with tourists from all over the world admiring it’s architecture and unusual mix of sandstone of different colors, due to the difference between the color in stones from the old church and new ones.

In contrast to the architecture of the old town „Kulturpalast“ (The Palace of culture is designed in the style of Bauhaus Modernism. It was opened in 1969 and it is until today the cultural heart of the city. After extensive renovation and modernization, it was reopened in April 2017. This large auditorium is now a first-class concert venue and home to the famous Dresden Philharmonic Orchestra.

Kulturpalast is also home for the Herkuleskeule cabaret ensemble and the municipal central library.

Like almost every building in the historical center of Dresden, Central station has a long history of building, renovation, destruction during the period of the Second World War, and reconstruction at the beginning of the 21st century.

Today it is most famous by it’s fiberglass roof designed by British architect Sir Norman Foster. Old panels of framed glass were replaced by new 0.7 mm fiberglass membranes that are coated from both sides with 0.1 mm thick Teflon. The material is self-cleaning and this was the first time that a historic building was treated with this new material. It is very durable, so even it is so thin, it is possible for the maintenance workers to walk on it!

The membrane is very translucent and the building itself doesn’t need cooling even in bright sunlight.

The last suggestion for pictures of Dresden you should show to your friends is Museum of military history, which was opened in 2011 after six years of construction. The facade of the Neo-Classicist arsenal has been interrupted using the design of Daniel Liebeskind.

Instead of glorifying war and armies, the museum tries to present the causes and consequences of war and violence. Museum has a large collection of military technology, handguns, uniforms and insignia, photographs and documents, but it’s primary focus is on the human component of war. The hopes, fears, courage, compassion and aspirations of the ones involved in the war. The museum is encouraging people to ask questions about war and seek new answers that would avoid war in the future. Eleven themed tours are offered and three chronologies: 1300-1914, 1914-1945 and 1945-today.

That is it! Now go and show your friends what a great time you had in Dresden and make them visit this beautiful town themselves.

Image by Th G from Pixabay