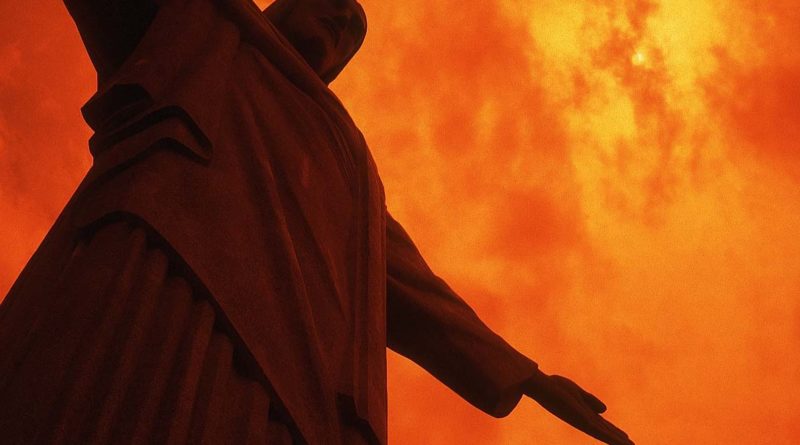 Rio de Janeiro is one of the most spectacular cities in the world – see pictures. It is a natural harbour, and has good beaches surrounded by green mountains. After Sao Paulo, Rio, with six million people, is Brazil’s second most populous city and its best known city throughout the world. Rio’s climate is tropical, so summer months are humid.

Corcovado Mountain: Take a funicular through the Tijuca Rain Forest up to the iconic statue of Cristo Redentor (Christ the Redeemer). The view of the city from this point is breathtaking. The reinforced concrete and soapstone statue was built 1931 and is the largest Art Deco statue in the world, although at 30 metres (98 feet) tall it is only the fifth largest statue of Jesus. Under the statue is the Chapel Nossa Senhora Aparecida (Our Lady of the Apparition), and you can get married or baptised there!

Rio is an extremely modern city, with most of its urban attractions conveniently placed in a compact area in the city centre. It has some superb buildings, including museums that perfectly present the vibrant Brazilian culture. The most important is the Museu Historico Nacional, which presents Brazil’s history, while the Museu do Indio focuses more on the fast-disappearing indigenous cultures of the country. Rio’s cuisine is a first-rate mix of European and African influences, and meat lovers will be in their element with restaurants serving some of the world’s finest steaks.

In 2014 the FIFA World Cup will be held in Brazil for the second time (the last was 64 years ago) and millions of fans and tourists are expected. The Maracana Stadium in Rio is one of the principal venues, and is being renovated along with arenas in 11 other cities. Surfing is part of the culture in Rio and you will see surf boards everywhere, although the sea conditions and the high density of surfers competing for the best waves mean it may not be the best place in the world to go surfing. There is sometimes hostility to outsiders which occasionally leads to fights, and some surfing groups are believed to be involved in the drugs trade. However Rio is a good place to learn Kite Surfing, though you need to go out of the city to find the schools.

Rio is of course most famous for its annual carnival – the greatest party in the world, held just before Lent every year. There is not just one parade but a number of different events to choose from, the most famous being the Cordao do Bola Preta, the traditional carnival parade in the city center, and the Samba School Parades in the Sambadrome. Visitors to the carnival are never disappointed. The atmosphere is incredible, the floats amazing and the people beautiful. Another big festival time is New Year’s Eve, when over two million people, mostly dressed in white, descend on Copacabana Beach to party the night away. They like to spray champagne around at midnight for good luck, so you may not want to wear your very best clothes! Travelers to Rio expect something very special and this amazing city fulfills each and every expectation.