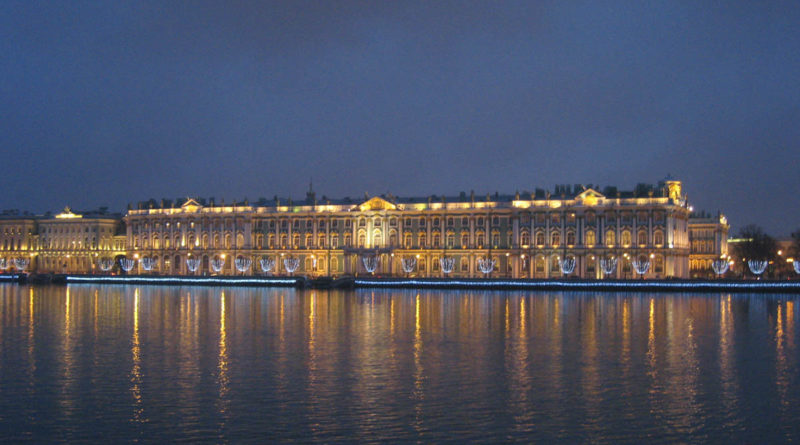 The Historic Centre of this Russian town is an excellent place to make beautiful photos of Saint Petersburg since the Historic Centre and Related Groups of Monuments constitute a UNESCO World Heritage Site, Because of that, it is also referred to as Russia’s Culture Capital. The city situated on the Neva River, at the head of the Gulf of Finland on the Baltic Sea. It is Russia’s second-largest city after Moscow and the 4th-most populous city in Europe. It is also the most important Russian port on the Baltic Sea.

It was the official residence of the Russian Emperors from 1732 to 1917. Today, together with its precincts forms the Hermitage Museum. Situated between Palace Embankment and Palace Square, in Saint Petersburg, in the proximity to the site of Peter the Great’s original Winter Palace, the present and fourth Winter Palace was built and altered almost continuously between the late 1730s and 1837 when it was severely damaged by fire, but also immediately rebuilt.
The palace was constructed to reflect the might and power of Imperial Russia. It was designed by many architects, most notably Bartolomeo Rastrelli, in what came to be known as the Elizabethan Baroque style. Due to a big fire, the palace’s rebuilding of 1837 left the exterior unchanged, but large parts of the interior were redesigned in a variety of tastes and styles, which finally led to the palace to be described as a 19th-century palace inspired by a Rococo style.

The Peter and Paul Fortress

The Peter and Paul Fortress is the original citadel of St. Petersburg, Russia, founded by Peter the Great in 1703 and built to Domenico Trezzini’s designs from 1706 to 1740 as a star fortress
Today it has been adapted as the central and most important part of the State Museum of Saint Petersburg History. The museum has gradually become virtually the sole owner of the fortress building, except the structure occupied by the Saint Petersburg Mint.
The fortress contains several notable buildings clustered around the Peter and Paul Cathedral and can be found on many most beautiful photos of Saint Petersburg.
The cathedral is the burial place of all Russian tsars from Peter I to Alexander III, except for Peter II and Ivan VI. The remains of Nicholas II and his family and entourage were re-interred there, in the side chapel of St. Catherine, on July 17, 1998, the 80th anniversary of their deaths. Toward the end of 2006, the remains of Dowager Empress Maria Feodorovna were brought from Roskilde Cathedral outside Copenhagen and reinterred next to her husband, Alexander III. The fortress walls overlook sandy beaches that have become among the most popular in St. Petersburg. In summer, the beach is often overcrowded, especially when a major sand festival takes place on the shore.

Church of the Savior on Blood

Construction of the church began in 1883 during the reign of Alexander III, two years after the assassination of his father Alexander II. The church was dedicated to being a memorial to his father. A temporary shrine was erected on the site of the attack while plans and fundraising for a more permanent memorial were undertaken.
Architecturally, the cathedral differs from Saint Petersburg’s other structures. The city’s architecture is predominantly Baroque and Neoclassical, but the Savior on Blood harks back to medieval Russian architecture in the spirit of romantic nationalism. It intentionally resembles the 17th-century Yaroslavl churches and the celebrated St. Basil’s Cathedral in Moscow.
The church contains over 7500 square meters of mosaics—according to its restorers, more than any other church in the world. The interior was designed by some of the most celebrated Russian artists of the day—including Viktor Vasnetsov, Mikhail Nesterov and Mikhail Vrubel, but the church’s chief architect, Alfred Alexandrovich Parland, was relatively little-known, born in Saint Petersburg in 1842 in a Baltic-German Lutheran family.

Singer House, also widely known as the House of the Book is located at the intersection of Nevsky Prospekt and the Griboyedov Canal, directly opposite the Kazan Cathedral. It is recognized as a historical landmark, has official status as an object of Russian cultural heritage and serves as the headquarters of the VKontakte.
The building was designed by architect Pavel Suzor for the Russian branch of the Singer Sewing Machine Company. The management of the Singer Company initially intended to construct a skyscraper, similar to the Singer Building, the company headquarters under construction at that time in New York City, but the Saint Petersburg building code did not allow structures taller than the Winter Palace (the Emperor’s residence). Suzor found an elegant solution to the 23.5-meter height limit: the six-story Art Nouveau building is crowned with a glass tower, which in turn is topped by a glass globe sculpture created by Estonian artist Amandus Adamson. This tower creates the impression of a substantial elevation but is subtle enough not to overshadow either the Kazan Cathedral or the Church of the Savior on Spilled Blood.

The Lakhta Center is an 87-story skyscraper built on the outskirts of Saint Petersburg that can be found on recent photos of Saint Petersburg. Standing 462 meters tall, the Lakhta Center is the tallest building in Russia, the tallest building in Europe, and the 16th-tallest building in the world. The Lakhta Center is also the second-tallest structure in Russia and Europe, behind Ostankino Tower in Moscow. The center is designed for large-scale mixed-use development, consisting of public facilities and offices. The building was designed by RMJM. t is intended to become the new headquarters of Russian energy company Gazprom. According to the criteria of ecological efficiency, it is one of the five most eco-friendly skyscrapers in the world. The concrete pouring of the bottom slab of Lakhta Center’s foundation was registered by Guinness World Records as the largest continuous concrete pour.