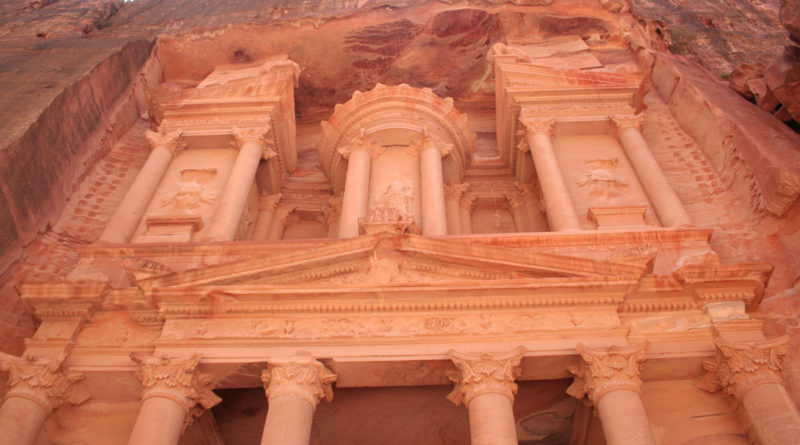 The ancient city of Petra has been a UNESCO World Heritage Site since 1985. UNESCO has described Petra as “one of the most precious cultural properties of man’s cultural heritage”. In Lisbon, in 2007, Al-Khazneh was voted one of the New 7 Wonders of the World. Because of the beauty and mystique pictures of Petra implicate, the site appeared in films such as: Indiana Jones and the Last Crusade, Arabian Nights, Passion in the Desert, Mortal Kombat: Annihilation, Sinbad and the Eye of the Tiger, The

Returns, Transformers: Revenge of the Fallen, Samsara and Kajraare. Being a scenery for widely known movies made Petra famous all around the world, not only with people who have a passion for history, but with the widest of the film audiences.
Archeologists have, by now, discovered only 15% of what is believed to be the full size of the city.
If you are thinking of visiting Petra, you should definitely visit these five locations:

The Siq is the ancient main entrance leading to the city of Petra. It starts at the Dam and ends at the opposite side of the vault. The entrance is formed by a split rock with a length of about 1200m and a width of 3 to 12m, and height up to about 80m. Most of the rock is natural and another part was sculptured by the Nabataeans, the people who established the city. The Siq, the main road that leads to the city, starts from the Dam and ends at the Treasury. This rock canal measures 160 meters in length, 3 to 12 meters in width and reaches up to 80 meters in height. The Siq is for the most part created by natural rock formation and the rest was carved by the Nabataeans.
At the beginning of the Siq, the remains of the city’s gate can still be seen. On both sides of the Siq, there are channels to draw water from Wadi Musa (the Valley of Moses), from outside the city to the inside.
Sides of the Siq were decorated with Nabataean sculptures, mostly representing gods. Statues of gods and their sculptures were situated very close and even adjacent to the channels probably because of the Nabataean belief that water was sacred. In addition, on the left side, there are idols called Sabinos Statues.

The end of the first part of The Siq opens up onto Petra’s most magnificent facade and the one providing sight for another of the beautiful pictures of Petra; the Treasury, or Al Khazna. It is almost 40 meters high and intricately decorated with Corinthian capitals, friezes, figures and other elements of the same architecture. The Treasury is crowned by a funerary urn, which according to local legend conceals a pharaoh’s treasure. Although the original function still remains a mystery, The Treasury was probably constructed in the 1st century BC and the urn represented a memorial for royalty. The Treasury consists of two floors with a width of 25.30 meters and a height of 39.1 meters.
The most recent excavation here led to a discovery of a graveyard beneath the Treasury.

The Theatre, a wonderful monument to the importance of art amongst Nabataeans was carved in the mountainside during the reign of King Aretas IV (4BC-AD27) the Romans rebuilt the stage back wall. A substantial part of the theater was carved out of the solid rock, while the scene and exterior wall were constructed.
It is located on the side of the mountain at the foot of the High Place of Sacrifice. The theatre consists of three rows of seats separated by passageways. Seven stairways ascend the auditorium and it can accommodate 4000 spectators.

The Street of Facades

It is a name for the row of monumental Nabataean tombs carved in the southern cliff face which lies past the Treasury and adjacent to the outer Siq. When you pass the Treasury, the Siq begins to widen gradually as it reaches into an open area. On both sides, there are a number of Nabataean burial interfaces decorated with grindstones along with other decorations. Some of these interfaces were, unfortunately, destroyed by natural factors. It is believed that these interfaces represent some of the senior officials in the city, or princes.

In 1964 it was renovated by the government in the same way originally built by the Nabataeans, preserving the site in which you can take another of the beautiful pictures of Petra. The dam was built to protect their capital from floods that arrived during the seasonal rain from the mountains and hills across the valley.
It protected the city of Petra by redirecting the floodwaters into a tunnel, later titled the ‘Dark Tunnel’. Proving to be successful, the dam represented the Natabataean’s skillful and modern infrastructure. During the excavation, it was found that the original name of the old city was Raqeem. However, upon their arrival, the Greeks renamed the city ‘Petra,’ meaning the rock.