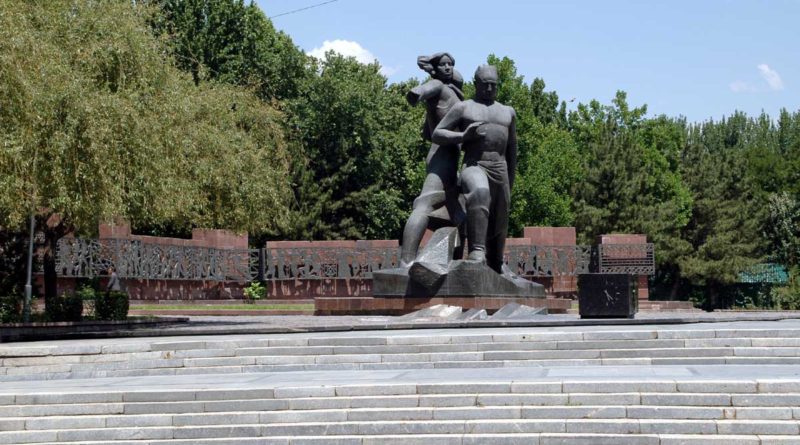 Uzbekistan, is a country in Central Asia, formerly belonging to the Soviet Union. It shares borders with Kazakhstan to the west and to the north, Kyrgyzstan and Tajikistan to the east, and Afghanistan and Turkmenistan to the south. Uzbekistan is Central Asia’s most populous country. Its 26 million people are concentrated in the south and east of the country and comprise nearly half of the region’s total population. Uzbekistan is a dry country, 10% of which consists of intensely cultivated, irrigated river valleys. The main crops grown are types of grain, and Uzbek cuisine reflects this as noodles and breads form an important part of the diet, though rice is also eaten quite a lot. Widespread sheep farming means that different kinds of mutton stew with vegetables are a staple diet.

Much of Uzbekistan’s GDP growth comes from favourable prices for certain key exports, especially cotton, gold and increasingly gas. Since independence in 1991, Uzbekistan has pursued a policy of gradual transition from a centrally controlled economy to a market economy. However there are still state controls and some international organisations have criticised the country’s lack of personal freedoms and its human rights record. After decades of suppression of religion during the Soviet period, Islam is now the dominant religion in Uzbekistan, with an estimated 90% of the population. 5% are Russian Orthodox Christians, and the remaining 5% includes Jews who once were numerous, but now number only a few thousand.

Uzbekistan is also putting itself on the tourist map. Tourist facilities and services in the country are constantly improving and increasing as tour operators attract visitors to this fascinating land. Uzbekistan is Central Asia’s oldest country and can look back on a history and culture spanning 25 centuries. Little wonder that travellers find Uzbekistan and its people so overwhelmingly enthralling.

The capital, Tashkent, has a number of museums displaying this culture, chief among which is the History Museum of the People of Uzbekistan in the city centre (open Tues to Sun at 10am).

The Fine Arts Museum of Uzbekistan has art from all periods of the country’s 1500 year history (Weds to Sun 10am), but more interesting to some is the smaller Museum of Applied Arts, which focuses on ceramics and textiles, and occupies an architecturally interesting house in the city centre. Other sights in Tashkent are relics of Soviet dominance, such as the People’s Friendship Palace in the city’s largest park, and the TV Tower with its revolving restaurant 110 metres up. However indigenous culture is also available in the form of three 15th century mausoleums near the university, and the 16th century Kulkedash Medrassa and mosque on a hill above Chorsu Bazaar. This bazaar in the south of the Old Town is a farmers’ market where you can see all the produce of the country displayed. Non-food items can be found at the Yangiobod Market, also known as ‘Tezykovka’, a flea-market selling all kinds of junk.

Hotels in Tashkent are reasonable if you don’t mind over-the-top Soviet architecture – some of the hotels are huge and in “official” style; but some western chains are moving in now, so you have the well-recommended Radisson Blu Hotel and the Ramada Tashkent. There are also smaller, hostel-like Bed and Breakfast places which may give more of an Uzbek experience, such as Jahongir B+B and Gulnara Guesthouse.