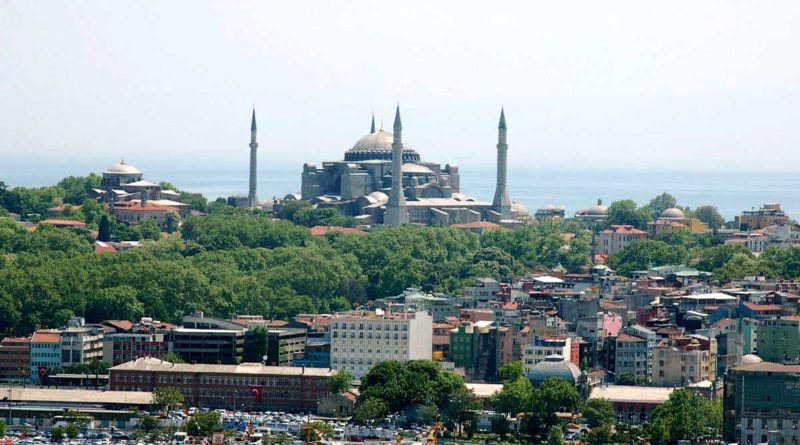 Turkey is a Eurasian country that stretches across the Anatolian peninsula in south western Asia and the Balkan region of south eastern Europe.

Turkey is a democratic, secular, unitary, constitutional republic whose political system was established in 1923 under the leadership of Mustafa Kemal Atatürk following the fall of the Ottoman Empire in the aftermath of World War I. Since then, Turkey has increasingly integrated with the West while continuing to foster relations with the Eastern world. In October 2013, Turkey opened a 13.6 km (8.5 mile) railway tunnel under the Bosphorus, adding to the existing road links by bridge and ferry services. The Marmaray tunnel fulfils a plan to link Europe and Asia first suggested in 1860 by the Ottoman sultan Abdülmejid.

The climate of Turkey is a Mediterranean temperate climate, with hot, dry summers and mild, wet and cold winters, though conditions can be much harsher in the more arid interior.

Turkey’s main trading partners are the European Union, United States, Russia and Japan. Turkey has taken advantage of a customs union with the European Union, signed in 1995, to increase its industrial production destined for exports, while at the same time benefiting from EU-origin foreign investment into the country.

Turkey has been a member of NATO since 1952; it is a member of the G-20 group of major economies, and of the OECD. With a majority of its people being Muslims, Turkey is also a member of the Organisation of Islamic Cooperation, and geographically and politically sits at the interface between East and West.

Turkey has 11 Heritages on the UNESCO World Heritage list. Among these are the Archaeological Site of Troy; the capital city of the Hittites, called Hattusha; the 13th century Great Mosque and Hospital in Divriği, the Ottoman capital prior to the conquest of Istanbul; and the Neolithic site of Çatalhöyük in Anatolia, one of the world’s oldest towns. Turkey has many must-see locations in addition to these: the amazing natural landscape of Cappadocia, perhaps best seen from a hot air balloon at dawn; the Blue Mosque and nearby Hagia Sophia in Istanbul; the magnificent Düden and Manavgat Falls near Antalya; the ancient Greek city of Ephesus on the Aegean coast, once the Roman capital; and the World War 1 battlefields at Gallipoli. Then there are numerous seaside resorts on the Mediterranean, the Aegean, and the Black Sea, and opportunities for hiking and winter sports in the mountains and forests of the Uludağ National Park….. Turkey truly has it  all!

The only city in the world built on two continents, Istanbul has numerous architectural sites which reflect its long and varied history. Roman, Byzantine and Ottoman buildings abound, such as the Topkapi Palace and the Yildiz Palace and Dolmabahçe on the shores of the Istanbul Strait. Other things to do include taking a boat trip along the Bosphorus under the two magnificent suspension bridges, and shopping, or just looking, in the Grand Bazaar. For something different, cross the Golden Horn Bridge or take the ferry to Karaköy and Tünel to ascend the Galata Tower for a splendid view back to Istanbul, or take a trip to the islands of Istanbul to relax in the sun and sea.