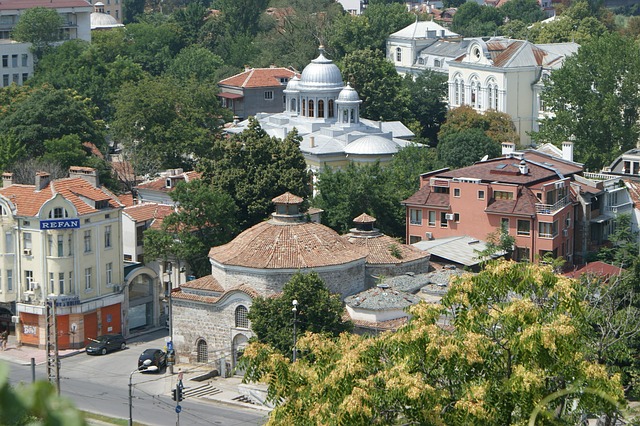 Plovdiv is a city located in Bulgaria and ranks as the country’s second largest city. It is usually nicknamed as he city of the seven hills’. It however, has had a variety of names throughout history. Some of them include; Philippopolis, Puldin, Ploudin, Kendrissos and Flavia Juila. Its most notable name is Philippopolis, as this was the name Philip II of Macedon gave it after conquering the Thracians.

If you love checking out historical attractions, then Plovdiv is the place to go. With over 6000 years of ancient history, Plovdiv is rated as the 6th oldest city in the world. This city has come from a Neolithic settlement to a Thracian settlement then to a thriving Roman city. It has undergone various stages of change and hence the reason why it is so rich in history. The culture here is influenced by a mix of Roman, Thracian and ancient Greek practices. You will notice this through the remnants of these ancient people that stand up to this day.

The climate in Plovdiv can be described as warm and temperate. Plovdiv experiences its driest month in February. This however changes in May and June which are the two months that experience the most rainfall. The warmest month is July with a temperature averaging 23 degrees Celsius. It is important to know that the city does experience rainfall even in its driest month.

Plovdiv has invested a lot in football. A number of football stadiums have been built over the years. The clubs in this city that feature in the top Bulgarian league include; PFC Botev Plovdiv and PFC Lokomotiv. They also have two other clubs in the city namely; Marista FC and Spartak Plovdiv. Other popular sports in the city include; Boxing, horse racing, volleyball and basketball.

The ancient amphitheater- Located on top of a hill, the theater gives you an amazing view of the city below. It was used by the Romans for entertainment and for holding governors’ meetings. This was also the place where gladiators used to fight. Such a place can help you visualize how the fights used to take place.

The Roman stadium- The Romans loved sports and this stadium hosted most of the sporting activities they did. The stadium has a chamber where tourists can be shown the activities that used to happen there.

The Old town- This town is located on the city’s’ hills and is full of museums. You can walk through the streets while visiting some of the spectacular museums in the area.

Kapana Art District- For people who love art, then this is a must visit place. The district has an array of art shops and ateliers. There are also amazing festivals hosted here.

The singing fountains- The view here is simply outstanding, especially during the night. You can catch the light and water shows here during the evening while listening to the music played in the fountain.

Despite being a historical city, Plovdiv does not fall short of modern forms of entertainment and recreational facilities. For recreation, the Aqualand water park is arguably the best place to go with your family as it is fun-packed. The Children’s railway is also a great place for kids to have fun. It is a mini-train that takes you through the tunnels and up the hills of Plovdiv.

Plovdiv has many amazing restaurants and the food is incredible. You could try their mouth watering Banitsa which is a delicious pastry filled cheese. Some other popular foods and drinks in Plovdiv include; Shopska salata, Tarator and boza. Winemaking is an art mastered by the Bulgarians over the years having been a settlement land for the Romans and Greeks. Plovdiv being the oldest city in Bulgaria and Europe has some amazing local wines perfected through the years. Some notable places to dine in Plovdiv include; The Brestovista wine house, Restaurant Dayana, Restaurant Megdana and Philippopolis.

Plovdiv is a popular transport and educational centre in Bulgaria. The main forms of transport include; Road and railway. The city has also heavily invested in cycling transport with over 600 bike parkings for those using this means of transport.

Plovdiv has quite a number of schools. There are art, foreign language, technical, elementary, high and mathematics schools. The universities in this city total up to six with a myriad of colleges and other university branches.