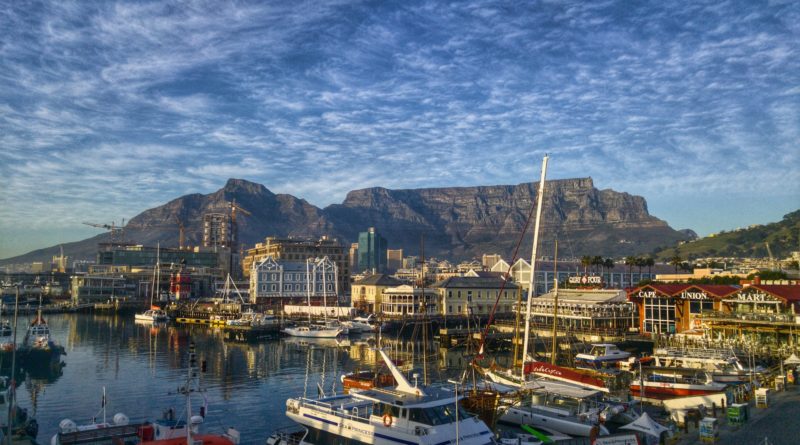 South Africa is a truly exciting place to visit and Cape Town is one of the most desirable destinations in the world. The Cape’s lush vineyards and rocky coast, the arid Karoo landscape, the fertile farmlands of Gauteng and Mpumalanga, the picturesque, snowy peaks of the Drakenberg mountains and the green hills and spacious beaches of KwaZulu-Natal are just a few of South Africa’s natural attractions. These, together with over 300 game and nature reserves, provide a colossal collage of contrasts. A delightfully diverse destination offering the photographer the ideal opportunity to take a “BigFoto”.

One of South Africa’s most popular attractions is the g>Kruger National Park. If you stay at a private lodge at Pafuri Wilderness Camp, you are in the land of the Makuleke people, who together with Wilderness Safaris, are the custodians of this magnificent region. Here you can encounter the BIG 5: lion, elephant, leopard, rhino and buffalo. Your guide will also point out special birds such as the crowned eagle, wattle-eyed flycatcher and many more.

The most popular time to visit is in summer, from November to March, when you can expect 11 hours sunshine a day. In the warmest, driest months, which are January and February, temperatures are around 26˚C. September/October (spring) and April/May (autumn) are still good times to visit, especially to see wildlife and flowers.

A good way to orientate yourself after arrival is by taking the City Sightseeing Bus. The city tour shows you all the important landmarks, with commentary, and you can get off and on again as many times as you like. The company also offers a wine tour and a mini peninsula tour. For getting around Cape Town after that you need to get a ‘myconnect’ bus card from the main station and put some credit on it. Then you can use the MyCiTi bus. The Southern Line Rail Route to Simon’s Town is a good way to see several beautiful suburbs and coastal villages, and is ideal for tourists, but beware of pickpockets on the trains. Table Mountain Cableway cars run every 10 to 15 minutes, and take you to the summit in 5 minutes, from where there are magnificent views of the city and ocean. There are number of short and long walks to choose from.

To take a trip out to Robben Island 9km (5.5 miles) off shore, head for the Nelson Mandela Gateway at the V&A Waterfront, where you can spend time in the Robben Island Museum, café and shop while you await your ferry. (Sailings are at 09.00, 11.00, 13.00 and 15.00) A round-trip takes about three and a half hours and includes a tour of the prison where Mandela was incarcerated for 18 years, guided by a former political prisoner. You will see the late President’s cell, preserved in its original condition, and the quarry where the prisoners did their hard labour.

Back on the mainland, you will want to see the District Six Museum (closed Sundays). This was a municipal district home to a lively but poor mixed non-white community, which was forcibly cleared away with no notice by the apartheid government in 1966 and declared a ‘whites-only’ zone. The museum preserves the memory of 60,000 of people who were relocated by force and their homes destroyed, and documents District 6 in pictures and artefacts like street signs, books, maps and audio visual recordings. You can tour the bulldozed streets on foot with a former resident as guide. If you haven’t had enough of South Africa’s painful past after this, you should go to The Slave Lodge on the corner of Adderley and Wale Street (opens 10.00, closed Sundays). This historic building was specially constructed to house 600 West African slaves in the 17th century. It now displays the story of 130 years of slavery in Cape Town.

Gambling is allowed in South Africa and Cape Town and their casinos are really nice so i would recommend visiting some of them. Or if you prefer to play from your hotel room, at onlinecasinoza you can check out the list of best online casinos in South Africa.

Kirstenbosch National Botanical Gardens on the eastern slopes of Table Mountain provides an antidote to so much human cruelty. Said to be one of the seven best botanical gardens in the world, it displays rare and endangered South African plants in a cultivated garden and nature reserve. There is a café, shop, nursery and activities for children (allow 2-3 hours for a visit).

If you are staying more than a few days in Cape Town – and why wouldn’t you – you might want to consider self-catering accommodation. Purpose built Marina Luxury One Bedroom Apartments on the V&A Waterfront sleep 2 and are quiet and secure. If there are more than 2 of you sharing, 5 Camp Street in the historic suburb of Gardens offers a chance to spend time outdoors at its pool or using the barbecue. If you like bright colours and traditional Victorian Cape Town houses, Sweet Berries Holiday Cottages in Sea Point suburb might be for you. There is a choice of 4 cottages with private backyards (only one has a pool), sleeping from 4 to 7.