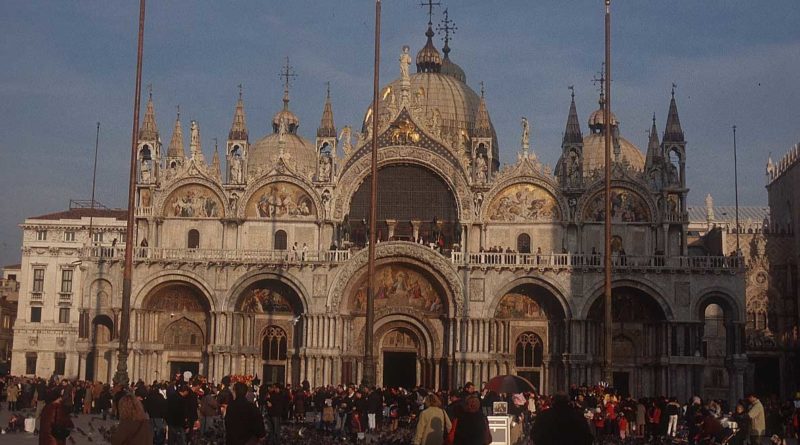 Venice is a tourist, commercial, and industrial centre and capital of Venetia and of Venice province. The city is built on 118 islands within a lagoon in the Gulf of Venice. Venice is connected with the mainland, 2.5 mi (4 km) away, by a rail and highway bridge. Between the islands run about 150 canals, mostly very narrow, crossed by some 400 bridges. The Canal Grande, is the main traffic artery. Houses are built on piles.

Enjoy the free pictures from Venice.

Emerging from Venice’s main railway station onto the Grand Canal in bright sunshine is to feel that you have wandered into a film set: the combination of water, boats and stunning architecture is just too perfect to be real. The rest of your visit is spent coming to accept that it is real, that real people live there, and it isn’t Disney at all! Arriving by train, perhaps from Treviso Airport where many of the low cost airlines land for Venice, is only the second best way to have your first view of the city. The best is to arrive by sea from the nearer Marco Polo Airport, either by traditional public water bus, or, if you can afford it, by private water taxi. Land at San Marco, and let one of the world’s most glorious cities embrace you!

What to see in Venice:

If ever it didn’t matter what you see in a tourist destination, it is true of Venice: being there and wandering around, getting lost and then finding yourself again, is the main way to experience the city. Around every corner you will find something magical to photograph. However, for those who like more structure, here are the main sights:

The Grand Canal: without doubt Venice boasts the most magnificent main street in the whole world, and a main street without a single car!

Along a 4 km stretch and to the left and right of the canal, impressive churches and palaces surpass each other in splendour.

Piazza San Marco: the heart of Venice. Surrounded by arched arcades and unique monumental buildings, this is truly one of the world’s most beautiful squares.

(Tourist tip: when you are standing with the Basilica at your back, in the left hand corner of the square in front of you is a museum where they have a good café a lot cheaper than those on the Piazza, and you can use the toilet for free.)

The Basilica di San Marco, an enormous five-domed church combines Byzantine and Romanesque styles on a layout in the shape of a Greek cross. Its grandiose design dates from the 13th century.

The Campanile (bell tower) of St Mark’s Church collapsed in 1902. Two years later it again stood in all its former glory. If the queue here is too long, cross by waterbus to San Giorgio Maggiore where you can go up the campanile there and actually get a far better view back to San Marco and over the whole city.

Palazzo Ducale: the Doges’ Palace is grand and you see the state rooms from which Venice’s maritime empire was run, with interesting globes and maps of the period. Children will enjoy the dungeons. (Go early to avoid the day trippers’ queues – the Palazzo opens at 8.30am)

In addition to these main sights, Venice has countless magnificent churches, some of which put on music events. These include the Chiesa San Vidal in San Marco district (baroque, classical and modern music); Santa Maria della Pieta along from the Doges’ Palace on the Riva degli Schiavoni (Vivaldi’s church); and the Basilica dei Frari (church of the Friars – Vivaldi, Bach, Mozart etc). Other churches not to miss are the Scuola Grande di San Rocco (Tintoretto paintings); Santa Maria dei Frari (amazing art and architecture); and Santa Maria dei Miracoli (in the Campo of the same name).

For opera, La Fenice, Venice’s phoenix of a theatre, is the supreme venue. Twice destroyed by fire, in 1826 and 1996, the magnificently restored theatre has emerged from the flames and is now open again. If you don’t like / can’t afford opera, there are audio guided visits in several languages every day.

Finally, if wandering is your thing, these are the particularly interesting or attractive districts to walk around: The Ghetto (the first area in Europe where Jews were compelled to live, and which all later ghettoes are named after); Dorsoduro (a relatively quiet district near the university); Arsenale (the historic ship-building centre of the Republic); and Castello (beyond Arsenale, this district includes the Biennale Gardens where the international arts festival is held every two years.)

If you want to see inside one of the many Renaissance palatial houses you see everywhere, head for Ca’ Rezzonico in Dorsoduro or Ca’ d’Oro on the Grand Canal.

(Tourist tip: the best way to see Venice is from the water, and the key to enjoying a visit is to buy a ticket for the vaporetto (water bus) valid for unlimited travel during your whole stay. There are tickets for 24 hours, two days, three days and a week. You buy them at major “bus” stops and stamp them in a machine on the boat on your first journey; then, as long as you keep it on you, you can forget all about it and use the vaporetti as if they were free!)

Hotels are relatively expensive in Venice, and those around San Marco and the Rialto Bridge especially so. A good alternative is to rent an apartment from one of the online agencies, perhaps in quieter district like Dorsoduro or Cannaregio. Often these look onto side canals and may even have a balcony. You will be living among Venetians and can cater for yourself some of the time. Nowhere in Venice is very far from the main sights, and with a mixture of walking and taking a vaporetto, you can easily get anywhere.