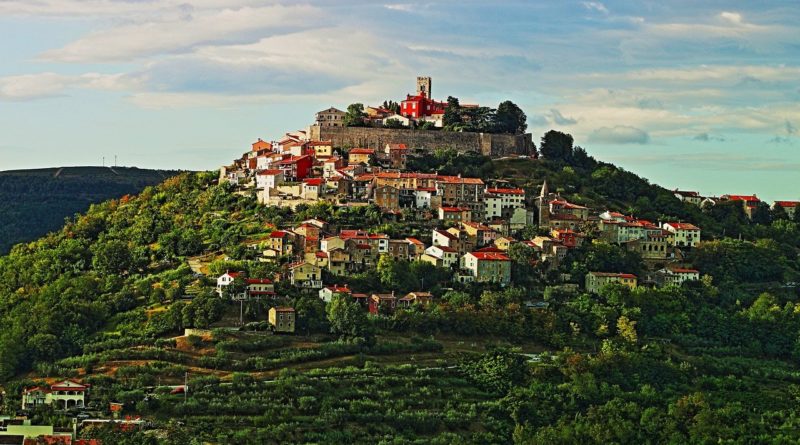 Motovun is a small town and municipality in Croatia, in the County of Istria. The best preserved historic part of the town is the medieval Istrian fortress, which developed on top of a steep hill. In prehistoric times, Illyrian and even Celtic tribes built their fortifications on the site of today’s Motovun. Its name is also of Celtic origin, and is derived from the word Montona, meaning “Town on the mountain”.

The history of Motovun begins before Roman times, when a settlement was built there by Sekusi, a Celtic tribe.

The town of Motovun consists of three parts. At the very top is the oldest part, below it is “Podgrađe”, and the newer part of “Gradiciol” descends down the slope. The town has preserved its medieval appearance to this day.

Motovun’s defense consisted of two rings of walls. The inner ring around the oldest part of the city dates from the 13th and 14th centuries. The inner gates of the city lead through it. Around Podgrađe was the second ring of the city walls, which is entered through the outer city gate from the 15th century. There is a lapidary in them today. Between the two gates is the outer town square. In the square, next to the inner door, is the town lodge from the 17th century, a beautiful lookout point to the surroundings.

The central square, “Square of Andrea Antia” is named after the Renaissance composer and music printer, born in Motovun in the second half of the 15th century. On the square there is the baroque church of St. Stephen, built in 1614 on the site of an older church. Next to the church is a bell tower-tower from the 13th century, with jagged parapets, which was built at the same time when the first church was built, on the foundations of which the present one was built. Little is known that in the same place in late antiquity was an early Christian basilica, even larger than today’s church of St. Stephen.

On the opposite side of the church is the Communal Palace, built in the 12th century, and expanded and restored in the 16th and 17th centuries. Below the square there is a large cistern in which rain was gathered, ensuring that Motovun had enough water supply during the whole year. The ascent of 1052 stairs leads from the bottom of the hill to the top of Motovun, which makes it the longest staircase in Croatia.

The Parenzana railway passed through Motovun, which gave the place a good connection with Poreč in the west and with Slovenia and Italy in the north. The station is preserved and is located at the foot of the hill on which the old part of town is located, just before entering the so-called Motovun tunnel.

Amongst monuments and landmarks of Motovun, the Church of the Blessed Virgin Mary “of the Gates” stands out. It was built in 1520. The name of the church is associated with a painting with the image of the Mother of God kept on a marble altar, built almost in the middle of the church. According to legend, the Virgin Mary appeared on a tree that was exactly where the altar is located today.

Another landmark is Polesini Palace. It was built by the family of the Marquis of Polesini, dates from the 16th century, and today it is a hotel. Opposite the building is the neck of a cistern from 1322, with a carved lion of St. Marko, the oldest lion in the stone after the one in Koper.

City Gate was built in the Renaissance style and it is adorned with the coats of arms of patrician families. To this day, openings have been preserved in the parapet that were used to throw oil, hot tar, stones and other materials at the enemies who were attacking the city.

It is not dated, but it was certainly reconstructed in 1855 by the vow of the inhabitants of Motovun, which followed the cholera epidemic.

City Lodge: On the lower square there is a lodge, built in 1331. Today, the square is named after Josef Ressel, the inventor of the propeller who spent part of his life in Motovun.

One of the best cultural landmarks of Motovun is the “Motovun Film Festival”, which takes place in late July and lasts for five days. It was first held in 1999, and its founder is the Croatian director Rajko Grlić.