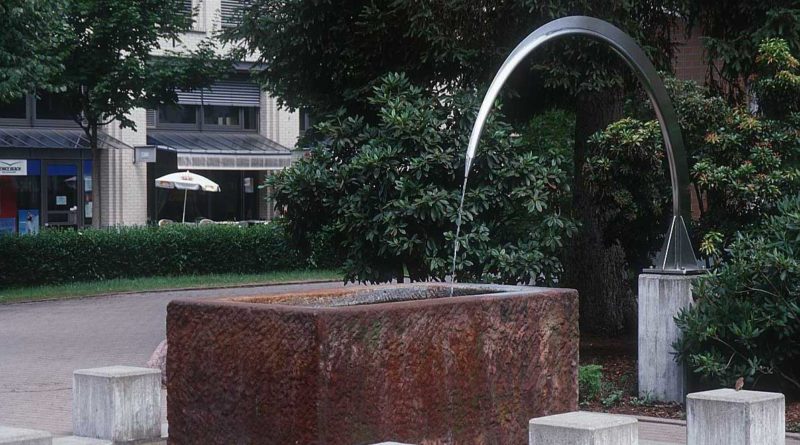 The original meaning of fountain (from the Latin ‘fontana’) was a natural spring or pool from which water flowed; for example the source of a river was called a ‘fountain’ or ‘fountainhead’. The use of the word ‘fountain’ for a man-made structure throwing water into the air in a controlled way was first recorded in English around 1500 AD, after the word had been in use for nature’s version for nearly 100 years.

Traditionally a fountain has a water source which fills a basin, trough or something similar and then drains away. Fountains can be very simple, very elaborate and sometimes very high. Some are computer controlled, with the fountain bursting and subsiding in rhythmic patterns. Some flow in sheets over a variety of surfaces, some cascade from one basin into another. Some are simply set in an ornamental pool or garden pond, whilst others are beautifully illuminated. And some have sculptures, including ones where many creators have the same idea as to where the water should spring from!

Humans have long found fountains fascinating. The ancient Greek for fountain was ‘pege’, and ‘pegomancy’ was a form of divination using fountains: the diviner studied the pattern of bubbles in the water of a sacred pool or spring, and claimed to be able to look into the past or foretell the future from them.

In ancient Rome fountains provided drinking water, and they were considered so important that each major fountain was connected to two different aqueducts so that if one failed there was still water available. No fountains from the Roman Empire survive: the many beautiful fountains now in Rome all date from the Renaissance period or later.