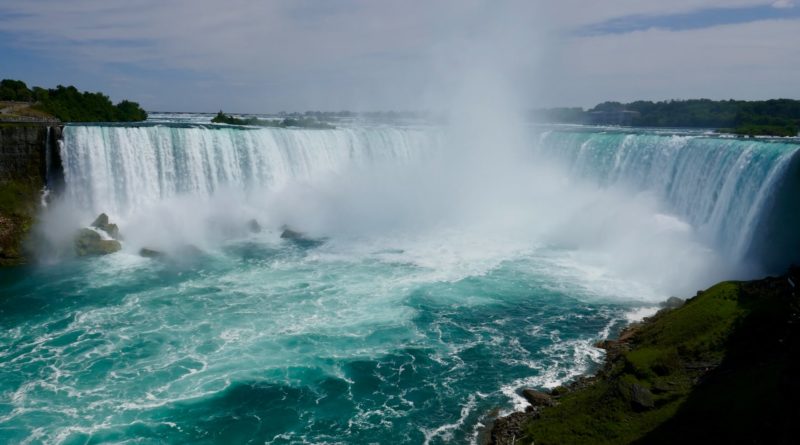 Niagara Falls is arguably one of the most popular landmarks in the world, and in the United States and Canada alike. It is a huge impressive waterfall bordering the two countries.

It was included in so many lists and travel recommendations, and that is for a good reason – it is surely one of the most spectacular natural wonders on the North American continent. The place is visited by more than 10 million tourists every year, being one of the most visited tourist attractions in the world.

And is also one of the most popular places on Instagram, with more check-ins than Machu Picchu, Empire State Building, and Grand Canyon.

But what is Niagara Falls?

Niagara Falls is actually a group of three waterfalls, having the highest flow rate of any waterfall in North America. The water has a drop off the cliffs from a height of around 50m. The most famous of the three waterfalls is the Horseshoe Falls, the one on the Ontario side, which offers the best views and the most attractions.

It is located between two cities with the same name – the American Niagara Falls, and the Canadian one, and it literally drains Lake Erie into Lake Ontario, up North and then further into the Atlantic Ocean.

The natural wonder is easy reachable from tow major cities, Toronto and Buffalo, and is a tourist attraction on the American lists, and also on the Canadian ones. Being so close to important cities makes it one of the top day trips for tourists coming from both sides.

Some of the attractions are the observation towers, souvenir shops, restaurants, hotels, and casinos. One example is the Niagara Fallsview Casino Resort – one of the most popular offline casinos in Canada in 2020, which was open publicly in 2004. Nowadays, many gamblers are playing their favorites games online, and in Canada casino online is an increasingly popular and fun activity.

So, why visit Niagara Falls?

If you are not yet convinced yet to visit the Niagara Falls, we present you a lot of reasons to do so.

First, you can take a boat tour, and a poncho suit, and go to the falls edge. Here, the roaring sound of the falling water and the mist of the falls will make you feel how it feels at the core of a giant waterfall. And you can experience all this abord of the “Maid of the Mist”, the boat tour which takes you in all the amazing places of the waterfall.

Other activities include zipline rides and helicopter journeys, or just walks on the Canadian part of the waterfall. Its drop power is so big, that the sidewalk is often wet from the water drops.

Then, there is the Skylon Tower, a 775-foot high building from which you can enjoy the breathtaking views from the observation deck – both inside and outside. The tower has also a revolving restaurant, where you can dine with a view. The way to get up there is in a glass-enclosed elevator. Going at night is even more spectacular, as you can see the night city lights.

Speaking of the lights, here is another strong reason to visit Niagara Falls: The dazzling light show at the fall of the night. The water is illuminated in different colors, and the fireworks show will just add to this beauty.

Other major attractions and activities are driving the Niagara Parkway, go cycling, walk the Niagara Glen, see the small Niagara-on-the-Lake town, see the Old Fort Niagara, enjoy the nightlife, or go to the Niagara Parks Botanical Gardens and the Butterfly Conservatory.