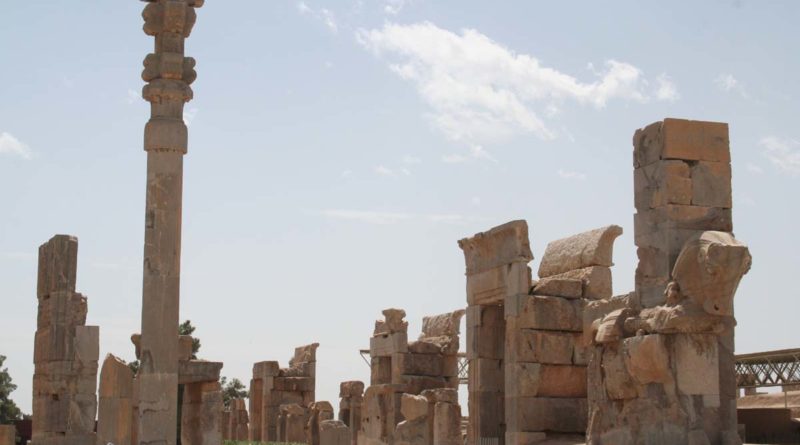 It is impossible to experience everything this city has to offer in just one visit to Shiraz, but if you go to these historical landmarks still exuberating with life, you can be sure you have seen the most important ones.

Eram Garden (Bagh-e Eram) is located along the northern shore of the Khoshk River in the city of Shiraz. It is one of the most famous and beautiful Persian gardens in all of Iran. The word ‘Eram’ is actually the Persian version of the Arabic word ‘Iram’ which means „Heaven“ in Islam’s holiest of books, the Qur’an. Once you enter this beautiful garden, you will easily understand why Eram Garden evokes such a description. Full of beautiful flowers, aromatic myrtles and high cypress trees (one of which is said to be 3000 years old), the Eram Garden is a major tourist destination, especially during the spring.

Nasir al-Mulk Mosque was constructed between 1876 and 1888, during the Qajar dynasty, which ruled Iran from 1785 to 1925. It is the place in which the high level of art and craftsmanship of master craftsmen of Shiraz is at full display.
This beautiful Mosque, one of the most beautiful in Iran, is known also as the “Pink Mosque” due to the pink-colored tiles blanketing the ceiling.
Inside the mosque is an open courtyard with a rectangular pool in the center which is surrounded by flowers. The building’s facade is embellished with dozens of arabesque arches, adding to the beauty of the light show from the stained glass.

With amazingly beautiful stained glass windows, thousands of painted tiles on the ceiling and Persian rugs covering the floor, this place of worship feels like you’ve stepped into a kaleidoscope. When you visit Shiraz, he best time to visit the mosque would be in the early morning, when the sun reflects the stained glass patterns onto the floor.

Vakil Bazaar is a part of the Shiraz Bazaar which was built in the 11th Century by Karim Khan following his plan to make Shiraz a prominent trading center. This architecturally beautiful building is a trade hub for merchants selling traditional products such as spices, rugs, handmade copper pieces, antiques, Persian sweets and much more.
Unlike similar places in the world, Vakil bazaar is not just a tourist trap, but it is actually a very vibrant place in which locals do their daily shopping.
Its beautiful vaulted brick ceiling regulates the temperature of the building and keeps it cool in summer and warm in winter. This makes the bazaar a great place to escape the heat which at times during the summer, can be unbearable.
The halls of the bazaar offer amazing sensory experience, the colors of the spices and their smell, lingering in the air, throughout this section of the bazaar.
There is a very large selection of handcrafted items on offer, but if you want to buy them, it would be best to go to the bazaar with a local. Merchants tend to set different prices for locals and tourists.
Vakil Bazaar’s attractions are not limited to shopping, there are also numerous cafes, a bathhouse, and several restaurants that you can visit. Vakil Bazaar is a must-visit spot in Shiraz. Even if you don’t want to buy anything, you’ll be mesmerized by the beauty and atmosphere of this market.

The Tomb of Hafez is located in the peaceful setting of the Musalla Gardens which is radiating with the sense of poetry and romance. Hafez worked and lived in the 14th-century. He is considered the Shakespeare of Iran, one of the greatest Persian poets of all time, and a source of national pride.
The „Divān“, Hafez’s collected works, is regarded as a pinnacle of Persian literature. The poet is revered as a people’s hero to this day, and Iranians congregate at his tomb, especially at sunset, to pay their respects.
Hafez’s tomb lies inside an open pavilion encircled by eight columns, topped with a mosaic-tiled dome that glows beautifully when lit at night. The current pavilion and surrounding memorial structures were created in 1935.

When you visit Shiraz, you simply must go to beautiful Vakil bath, which is a part of a larger complex consisting of Valik bazaar, Vakil bath and Vakil Mosque. It was built in Zandyeh era about 240 years ago as a public one, but this traditional and historical bath was used even by the kings. Vakil bath is a traditional bath much like Turkish baths. It has a unique drainage and heating system which is using waterways on the floor.
Basins are made of marble and the walls are covered with paintings and designs, evoking old stories and people’s desires and dreams from the time in which the bath was built.
Wax sculptures set in different parts of the baths illustrate various activities people used to do there and each part of the bath has been staged and designed as they would have been used.