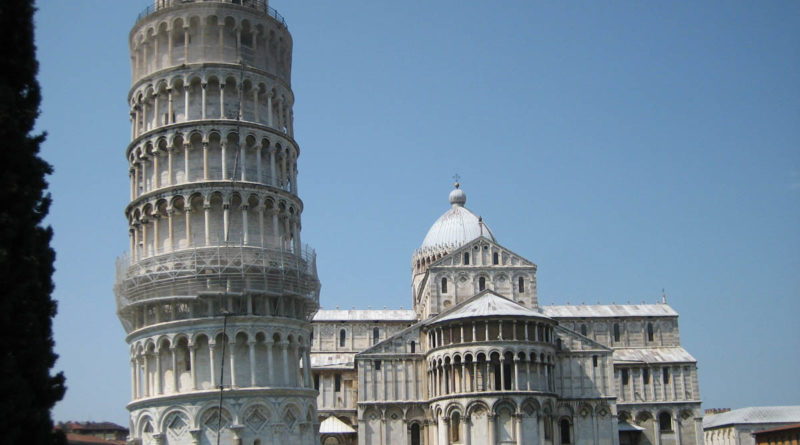 Visit Pisa
Leaning tower is not the only reason to visit Pisa. Things to do in Pisa revolve around numerous examples of brilliant architecture, an intense and thriving student culture, some curious shopping and really tasty food. For the most of it’s early history, it was a part of the Roman Empire. Even as that empire declined, Pisa became a major naval authority. It continued to play an important political, religious and military role for the next several centuries, with Genoa, Florence, and Venice as it’s main competition. Just when it seemed that Pisa was indomitable, it failed; a series of defeats against the tactically brilliant Genoese started Pisa’s long decline and eventual crumbling. Eventually, Pisa came under Florence’s domain.
Fortunately, all the architectural development remained and continued to flourish; so today’s Pisa tourist attractions include rich museums and historical buildings. The city rebuilt its image as a center of learning. Galileo and Fibonacci themselves were born here, so if you’re willing to deviate from the main attractions, you could add these birthplaces to your list places while you visit Pisa.
Life in Pisa is generally laid back; there is no heavy nightlife. Instead of that, everybody from students to the elderly spend nights with some wine, finger food and long contemplative walks. Holidays to Pisa really are all about chilling under the Tuscan sun.

The church was erected outside Pisa’s early medieval walls, to show that Pisa had no fear of being attacked. The area had already been used in the Lombard era as a necropolis and at the beginning of the 11th century also a church had been erected here, but never finished, that was to be named Santa Maria. Buscheto’s grand new church was initially called Santa Maria Maggiore until it was officially named Santa Maria Assunta.
The original building plan was a Greek cross with a grand cupola at the crossing, but today the plan is a Latin cross with a central nave flanked by two side aisles on each side, with the apse and transepts having three naves. The presence of two raised matronea in the nave, with their solid, monolithic columns of granite, is a clear sign of Byzantine influence. Buscheto welcomed Islamic and Armenian influence.
The structure’s present appearance is the result of numerous restoration campaigns that were carried out in different eras. In the 19th century both internal and external modifications; among the latter was the removal of the original facade statues (presently in the cathedral museum) and their replacement with copies.

It is the largest baptistery in Italy, it is 54.86 m high, with a diameter of 34.13 m. The Pisa Baptistery is an example of the transition from the Romanesque style to the Gothic style: the lower section is in the Romanesque style, with rounded arches, while the upper sections are in the Gothic style, with pointed arches. The Baptistery is constructed of marble, as is common in Italian architecture.
Constructed on the same unstable sand as the tower and cathedral, the Baptistery leans 0.6 degrees toward the cathedral. Originally the shape of the Baptistery, according to the project by Diotisalvi, was different. It was perhaps similar to the church of Holy Sepulchre in Pisa, with its pyramidal roof. After the death of the architect, Nicola Pisano continued the work, changing the style to the more modern Gothic one. Also, an external roof was added giving the shape of a cupola. As a side effect of the two roofs, the pyramidal inner one and the domed external one, the interior is acoustically perfect, making of that space a resonating chamber.

If you’re looking for something else to do when you visit Pisa and you’ve already visited the main monuments in the Square of Miracles, take a stroll along the Arno River. The river, which also flows through the city of Florence, cuts through Pisa, separating the main tourist area to the north from the neighborhood around the train station to the south. And, though there’s nothing quite as jaw-droppingly spectacular as the Leaning Tower or the Pisa Cathedral, you will have beautiful views of the earth-tone palazzi on the banks of the river and the mountains in the distance.
The River Arno is one of the main rivers in Italy and Pisa was built around this waterway. This river stretches for 241km and has its source at Mount Falterona. The section of the Arno that runs through Pisa offers a truly beautiful landscape and is an amazing place to simply walk along. Five gorgeous bridges span the Arno in central Pisa and both the Lungarno Mediceo and Galileo Galilei run parallel to the river. The houses and architecture create a beautiful backdrop and this part of Pisa is truly photogenic.

Although this museum is a host of delightful treasures from the past of the Cathedral, it is one of the least visited in Pisa! The Cathedral Museum is located in the Piazza dei Miracoli and provides wonderful views of the leaning tower from its second floor windows.
Within the museum, you can find a huge collection of artifacts and relics from the Cathedral of Pisa and the surrounding region.
Items include embroidery, tombs, sculptures, paintings and silversmith work.
Although they are not part of Cathedral history itself, there you can also find a number of relics from Pisa’s naval history and a range of religious findings dating back to Roman times.

The Guelph Tower (Torre Guelfa) in Pisa Italy is located on the north side of the Arno River. The tower was destroyed by bombs during the second world war but has since been rebuilt.
This attractive and eye-catching structure is a part of the old citadel complex. The ancient complex of buildings was once the main ship-building area in Pisa during the 13th and 14th centuries. During the 15th century the tower was constructed however as part of the cities defensive fortifications. In the twentieth century, the tower has been renovated and is now open to the public. At the top, you are granted with fantastic panoramic views of Pisa – you can see the River Arno in all its glory, and even across to the Leaning tower and Cathedral.

Don’t visit Pisa without visiting The Botanical garden maintained by the University of Pisa.
The garden was established in 1544 under Cosimo I de’ Medici as the first university botanical garden in Europe, and entrusted to the famous botanist Luca Ghini of Imola. In 1563 the garden was relocated from its original riverside location (now the Medicean Arsenal) to one near the convent of Santa Marta, and in 1591 (under Joseph Goedenhuyze) again moved to its third and current location. From these early times, the garden has contained a gallery of natural objects (now Pisa’s Museo di Storia Naturale), a library (now part of the university library), and portraits of its directors throughout the centuries. It also includes one of the earliest iron-framed hothouses built in Italy.
Today the garden is divided into sections containing the botanical school, gardens, ponds, greenhouses, and various buildings. Major collections include herb gardens and arboreta, as well as the old botany institute, built 1591–1595, with a facade ornamented with sea-shells.