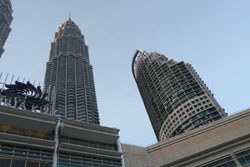 The Federation of Malaysia is a country in Southeast Asia. It consists of two geographical regions divided by the South China Sea:

West Malaysia (Peninsular Malaysia, Malay Peninsula) shares a land frontier in the north with Thailand and is connected by a causeway and a bridge in the south with the island state of Singapore;

East Malaysia, the northern part of the island of Borneo, is bordered to the south by Indonesia and borders the Sultanate of Brunei on the east, south, and west.

Malaysia’s population is comprised of many ethnic groups, with the politically dominant Malays making up the majority. By constitutional definition, all Malays are Muslim. About a quarter of the population are Chinese, who have historically played an important role in trade and business. Malaysians of Indian descent comprise about 7% of the population and include Hindus, Muslims, Sikhs, Christians, and Buddhists. About 85% of the Indian community is Tamil, but various other groups are represented, including Malayalis, Punjabis, and Chettiars.

Kuala Lumpur is the largest city in Malaysia and the capital of the federation. Within Malaysia, Kuala Lumpur is almost always abbreviated to KL. The executive branch of the Malaysian Government has shifted to a new administrative capital, Putrajaya, but the residence of the King of Malaysia, the Parliament of Malaysia, and the judicial branch remain in Kuala Lumpur. Kuala Lumpur is one of the three Federal Territories, and is an enclave within the state of Selangor, on the central west coast of Peninsular Malaysia.

Where to go in Malaysia

Malaysia is so big and offers so much, that you need to consider what kind(s) of experience you are looking for. For a sea and beach holiday, islands in Kedah and Terengganu states in Peninsular Malaysia offer crystal clear waters with great diving and fabulous beaches. Some have mangroves rich in wildlife, and although the modern tourist infrastructure is all there, local people still farm and fish in the traditional way. Langkawi Island is one of 99 islands off the coast of Kedah, and here you can hire a car and explore the island, or ride the cable car up to the top of Mount Mat Cincang. In Terengganu, Pulau Redang and Pulau Perhentian offer jungle trekking, boating, deep sea fishing and golf in addition to the beach. (Pulau Perhentian has two islands to choose from, Besar (more expensive and developed) and Kecil (cheaper and more for backpackers.)

For adventure, head for Mount Kinabalu in Sabah State where you can climb the worlds’ highest via ferrata (up to 3,800 metres, good head for heights essential!), or go trekking at 1,500 metres in the Cameron Highlands in Pahang State, among lovely little villages and farms. Wildlife-lovers can visit the elephant orphanage sanctuary at Kuala Gandah in Panang State, or the Sepilok Orang Utan Sanctuary in Sabah. If you just want to experience the culture of Malaysia, the Sarawak Cultural Village shows traditional daily life in this region, while the Islamic Arts Museum in Kuala Lumpur is the largest museum of Islamic art in all of Southeast Asia.

Where to stay in KL

Many backpackers like to stay in the lively ‘Golden Triangle’ area of the city, where Rainforest Bed and Breakfast is a budget hotel with safe boxes and encoded key cards for every room. Near China town and the central market is the colonial-style building housing the brilliantly named Reggae Mansion Kuala Lumpur, which has a rooftop bar hosting lively parties. Well located in the centre of the city is the Aloft KL Sentral, a 3 star hotel near the main railway station and handy for the business district, with a fitness centre and pool. Near the Petronas Twin Towers there are some more luxurious options: the Mandarin Oriental hotel offers you stylish rooms equipped with DVD players and iPod docks; the slightly cheaper Hotel Maya has an indoor pool and cable TV, as well as 24 hr room service.