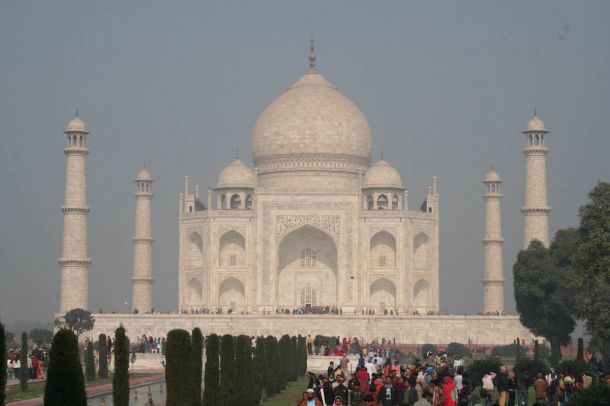 There are some basic facts you should know before you visit Taj Mahal. It is not just the place in which you can make beautiful photos. Taj Mahal is a mausoleum complex in the city of Agra located in western Uttar Pradesh state, northern India. It is situated in the eastern part of the city on the southern bank of the Yamuna River. Another historical tourist attraction near the Taj Mahal is Agra Fort, situated also on the right bank of the Yamuna river, about one mile to the West.

One of the most beautiful structural compositions in the world, the Taj Mahal is visited by millions of tourists each year. The complex is on the UNESCO World Heritage site list since 1983 and has been voted one of the World’s wonders in 2007.

Taj Mahal is the finest example of Mughal architecture, a blend of Indian, Persian, and Islamic styles.

It was built by the Mughal emperor Shah Jahān (reigned 1628–58) to immortalize his wife Mumtaz Mahal. She died in childbirth, giving birth to their 14th child in 1631, after having been the emperor’s inseparable companion since their marriage in 1612. The chief architect was probably Ustad Aḥmad Lahawrī, who was an Indian of Persian descent. The five principal elements of the complex—main gateway, garden, mosque, jawāb, and mausoleum were designed as a unified entity, according to the principles of Mughal building practice, which allowed no subsequent addition or modification. Building started about 1632. More than 20,000 workers were employed from India, Persia, the Ottoman Empire, and Europe to complete the mausoleum. In total, construction of the complex spanned 22 years.

When you visit Taj Mahal, you will probably hear a legend that tells a story about how Shah Jahān intended to build another mausoleum across the river to house his own remains. That structure was planned to be constructed of black marble, and connected by a bridge to the Taj Mahal. Shah Jahān was overthrown in 1658 by his son Aurangzeb, however, and was imprisoned for the rest of his life in Agra Fort.

The uniqueness of Taj Mahal lies in some truly remarkable innovations carried out by the horticulture planners and architects of Shah Jahan. One such example is placing of the tomb at one end of the quadripartite garden rather than in the exact center, which added rich depth and perspective to the distant view of the monument.

The four free-standing minarets at the corners of the platform added a previously unknown dimension to the Mughal architecture. The four minarets provide not only a kind of spatial reference to the monument but also give a three-dimensional effect to the complex. The Taj Mahal is a perfect symmetrical planned building. The building material used is brick-in-lime mortar veneered with red sandstone and marble and incrustation work of precious/semi-precious stones.

The most impressive in the Taj Mahal complex next to the tomb is the main gate which stands majestically in the center of the southern wall of the forecourt.

Taj Mahal is the finest architectural and artistic achievement amongst the whole range of Indo-Islamic sepulchral architecture. It is a masterpiece of architectural style in conception, treatment and execution and has unique aesthetic qualities in balance, symmetry and harmonious blending of various elements.

The garden surrounding the main building is set out along classical Mughal lines. It is square quartered by long watercourses with walking paths, fountains, and ornamental trees. It provides a striking approach to the mausoleum, which can be seen reflected in the garden’s central pools.

Over the centuries the Taj Mahal has been systematically neglected. A major restoration was carried out at the beginning of the 20th century under the direction of Lord Curzon, then the British viceroy of India. More recently, air pollution has caused damage to the marble stone of the Taj mahal which lead to restricting traffic near the sight to electric cars only. Factories in proximity to the Taj Mahal changed their energy sources from coal to natural gas in order to decrease the pollutants released in the air during production.

From time to time the Taj Mahal has been subject to India’s political dynamics. It was impossible to visit Taj Mahal during hight time, between 1984 and 2004 because it was feared that the monument would be a target of Sikh militants. In addition, it increasingly has come to be seen as an Indian cultural symbol. Some Hindu nationalist groups have attempted to diminish the importance of the Muslim influence in accounting for the origins and design of the Taj Mahal.

However, Taj Mahal is still used as a Muslim place of prayer and is closed every Friday for religious purposes.