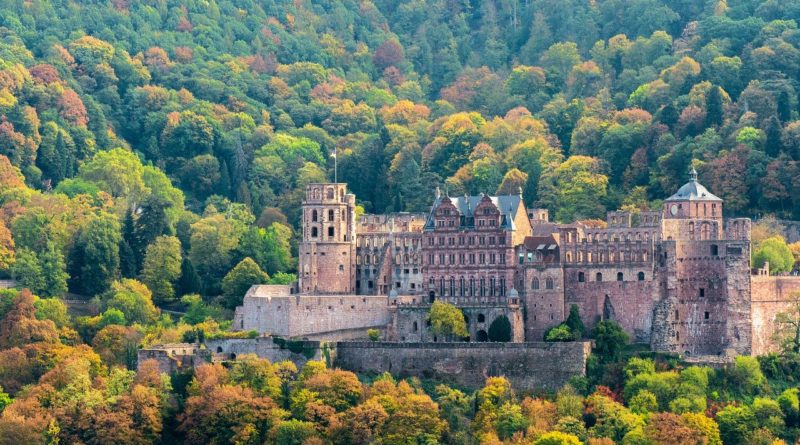 Heidelberg went from almost destruction due to the Thirty Years’ War in the late 17th century and faring better than most German cities after the second world war to retain its ancient feel and culture. It has grown to become a haven for the lovebirds, as it possesses a unique allure that earns it the title of one of the most romantic cities in Germany.

Along with the preserved culture, Heidelberg hosts several festivals throughout the year. Whether you’re visiting in the winter, spring, summer or autumn, you will be treated to pleasurable experiences with different events for each season and across a wide range of entertaining interests, from music, film making, art exhibitions to photo festivals.

Depending on who you ask, the old town located on the southwest of Germany is best known for the world-famous castle, river Neckar or one of the oldest Universities.  But there is a lot of sparks, adventure and romantic feelings to explore in the picturesque cityscape.

Walk the path of the great minds and brains

Along with being the home of the oldest University in Germany, Heidelberg influenced several famous achievers and great thinkers. Since the Nobel prize award started in 1901, 56 of the recipients had a connection with the city. The city possesses intellectual, literary, musical and artistic muse. Historically, it has a huge influence on Romanticism in Germany and was regarded as a cradle of the romantic movement in the late 18 century.

The historical Heidelberg was blessed with great thinkers across various fields in the mold of famous poets such as Ludwig Achim von Arnim, Joseph von Eichendorff, Clemens Brentano and Johann Joseph von Görres. If you appreciate creative minds, a rendezvous of Heidelberg’s brilliant minds is experienced along the philosophers’ walk, Philosophenweg, to follow the great minds’ path while enjoying the classic view of the Neckar. Some of the attractions to look out as you walk down this path are Eichendorff Stone, Hoelderlin-anlage, Schlangenweg and Merian-Kanzel.

Heidelberg’s palace, dated as far back as the 13th century, is a perfect representation of the Renaissance’s artistic and architectures. Sadly, some parts of the palace were ruined by the French invasion between the 17th and 18th centuries. Fast forward to this century. The partly destroyed castle attracts over a million visitors every year, and it’s one of the most popular destinations in Germany.

The allure of the castle can be seen from afar. For your time visiting Heidelberg, the least you deserve is a free heavenly experience walking through the garden, made exotic and romantic by orangery, beautiful fountains in addition to the historic hints with pillar remnants and other signs of what was once fortifications.

With the extra effort of climbing to the rooftop,  you will be rewarded with a fascinating view of the classic city in all its old and new glory.

Walking along the Nectar river over the old bridge or Alte Brucke is a pleasant way to take in all the old town’s glory. It is a link between the old town and the opposite bank, the eastern district of Neuenheim. The bridge was first built in the first century CE, with the exact date unknown. It has gone through a series of reconstructions, nine precisely.

Now known simply as the old bridge, It is arguably the most popular and iconic architectural landmark in Heidelberg. The present bridge is also known as the Karl Theodor Bridge. On the bridge is the monkey statue, which serves as a perfect spot for the photoholics. The monkey statue first appeared in the early 15th century but was destroyed in the Nine Years’ War. A substitute statue has a mirror in one hand, making a sign of the horn gesture with the other hand. Along with taking memorable pictures on the bridge, you also enjoy a stroll along with history while enjoying the city’s amazing view.

Took one hundred and thirty oak trees to construct; it is the world’s largest known wine barrel. Though rarely used as a wine barrel, its current estimated capacity is 219,000 liters. Though the city has four of such in its history, Heidelberg Tun constructed in 1751 by Prince Elector Karl Theodor is the only existing one.

The enormous barrel was designed not as a showpiece, but as to collect and store ‘wine tax’ from winegrowers. That purpose was defeated due to irreparable leakages. To maximize the experience, take some steps to the big platform built on top of the Heidelberg Tun, which serves as a dance floor.

Look out for the festivals

Heidelberg is always bustling with exciting events. Some of the events to look forward to including the international music festival and Heidelberger Stückemarkt in the spring, open-air theater performances and concerts in the summer, Heidelberg Fall Festival in the fall and Heidelberg Christmas Market in December. Regardless of the time, you visit, the small yet big old city is filled with events, leisurely activities, and cultural and historic fascinations.