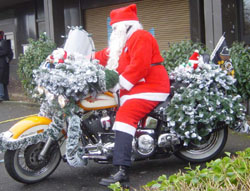 Many of our Christmas traditions were celebrated centuries before Christ was born. Giving gifts, the Yule log, carol singing, church processions and the 12 days of Christmas can all be traced back to the early Mesopotamians.

Sacaea, celebrated by the Persians and Babylonians, was a similar festival during which slaves and masters would exchange roles.

Early Europeans believed in evil spirits and as the dark days of winter approached, special rituals and celebrations were held to drive out evil and welcome back the sun.

During winter in Scandinavia the sun would disappear for many days. When it returned a Yuletide celebration was held and a special feast served around a burning Yule log fire.

The Roman’s celebrated their god Saturn with a festival called Saturnalia which ran from 17 to 24 December. Celebrations included masquerades in the streets, festive meals, visits to friends and the exchange of good-luck gifts. The Romans used decorations of garlands of laurel and green trees lit with candles. The fun and festivities in honour of a pagan god were frowned on by the early Christians who wanted to keep the birth of Christ a solemn, religious festival.

The Celtic culture of the British Isles revered all green plants, particularly mistletoe and holly. These were important symbols of fertility and used for decorating homes and altars.

The earliest English reference to 25 December as Christmas Day dates from 1043.

Christmas celebrations have always been controversial as many of the festive traditions have their roots in paganism. Frivolity and feasting, the giving of gifts and frequent excesses have always been in complete contrast to the simplicity of the Nativity and are often condemned as contrary to the true spirit of Christmas.

Although not the original purpose of the day, Christmas remains a traditional time for families to meet, enjoy a meal, and make merry.

Wherever you are and however you choose to celebrate, we wish you a Merry Christmas!